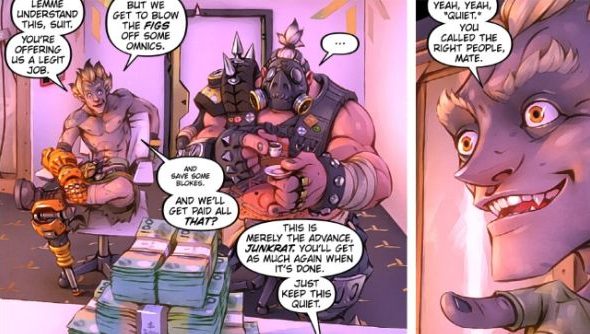 The Overwatch open beta is ongoing, we hope you’re enjoying it. If you’re not and were hoping for significant change before launch, here’s the bad news: what folks are playing now is the launch version of the game, minus some bug fixes. This info was revealed by game director Jeff Kaplan on the forums yesterday, around the same time as the latest universe-expanding comic went live. This time it’s focused on the explosive Junkrat and his larger, piggy friend Roadhog, and their first legit job. Things, as you might expect, do not go to plan.

Deciding who to play for launch? Let our guide to the best Overwatch characters help you out.

The statement about just bug fixes coming to the game between now and May 24 was posted by Kaplan in response to a thread asking specifically if there were features or changes we didn’t know about on the way. You can read his full response on Battle.net, but essentially the answer is no, we’ve got the full package beyond some bug fixes. He also reconfirms that Ranked/Competitive matchmaking won’t be making it in for launch, but is their number one priority, and that they have a lot of additional features planned for a “pretty amazing summer” of post-launch updates.

It’s not particularly surprising, but I was assuming there was another ‘big’ patch on the way either for open beta or launch – adding some cosmetics, some balance tweaks to the game’s more underpowered heroes (Zenyatta particularly) and improving features like highlights. Bug-squashing and server optimisation is clearly taking priority, as well as the larger updates down the line, but it’s a shame the switch to final won’t feel like much more than a couple of weeks break.

In the mean-time, however, there’s plenty of expanded universe content to devour. The latest comic, titled Going Legit and focusing on the destructive pair of junkers, was released last night. It’s 10 pages, like the previous, and a little on the wordy side, with plenty of action and explosions mixed in. Not the most subtle tale of hope, betrayal and legitimacy, but it is well drawn. Have a gander. There’s also still another animated short, probably focused on Soldier: 76 based on the preview footage we’ve seen in trailers, on the way before the 24th – expect it soon.