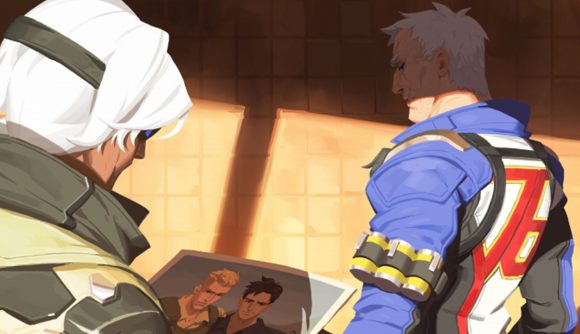 Today, we saw another bit of extended fiction announce an Overwatch character’s sexuality – Soldier: 76 is gay, or bisexual. Or maybe – okay, what we know for sure is that he had romantic relationship in the past with a man named Vincent. It’s a small detail in a much larger story, but it’s certainly the bit that’s garnered the most attention.

The story has Ana and Soldier: 76 working together, and at one point 76 reminisces about the old days with a stack of photos. Ana sees one of those photos – 76 with an arm around Vincent, and asks “Still keeping a candle lit for him?” 76 denies that, adding that “He got married. They’re very happy. I’m happy for him.”

That bit concludes with 76 lamenting that “Vincent deserved a happier life than the one I could give him. We both knew that I could never put anything above my duty. Everything I fought for was to protect people like him… That’s the sacrifice I made.“ You can read the short story Bastet in full via Blizzard.

If you’re keeping track at home, this marks the second canonically LGBT character on the Overwatch roster, since we met Tracer’s girlfriend in a Christmas comic years ago. That eventually led to a voice line in-game that references the relationship, though in the largely story-free world of Overwatch proper, there hasn’t been much opportunity for characters to discuss their relationships.

As noted on ResetEra, the scene in the new short story was also depicted in the comic that introduced Tracer’s girlfriend – Reflections. On the penultimate page, we can see 76 looking over the same photo noted now, featuring him and Vincent. So now you can look through the past few years of Overwatch material to guess at what other character details might be announced years from now.