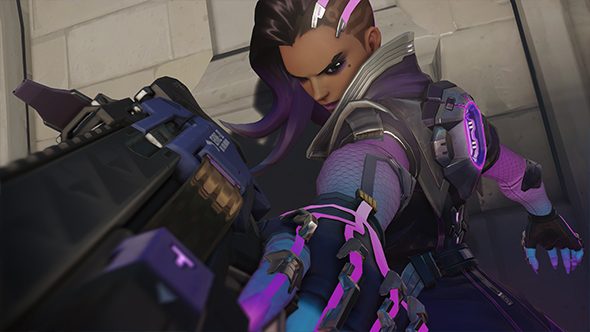 Overwatch’s Sombra could be set to get a pretty major rework. While there’s no timeframe on when (or indeed if) the hacker’s changes might go through to live servers, lead designer Geoff Goodman says some “really interesting” tweaks are currently being worked on.

In a forum post last night, Goodman said that Blizzard started out by looking into “seeing how far we could push the duration of her Stealth and Translocator abilities.” Those discussions lead to a situation that “allowed [Sombra] to play more and more as a scout/infiltrator for your team and also allowed her more time to pick and choose when and where she popped out to ambush her enemies.”

Blizzard is one of the best FPS games on PC.

Broken down more simply, Goodman says “now she has infinite duration on both Stealth and Translocator.” That obviously creates its own problems, so Sombra can now interact with the Translocator from a distance, and isn’t quite as fast when she’s in stealth – her movespeed bonus has been dropped to 50% from 75%.

Goodman summarises by saying that Sombra “is now in complete control over when she reveals herself, allow[ing] her to time her hacks better for her team, or go for a back line ambush during a critical moment in a team fight.”

Interestingly, Goodman does speak about these changes in the present tense, suggesting they are currently happening. However, it’s worth noting that what’s going on internally at Blizzard is subject to a lot of change before it hits the PTR, let alone live servers. We’ll keep you posted as and when we learn more, but don’t expect Goodman’s explanation (which you can see on the forums) to be the finished package.

While Sombra’s being reworked, Blizzard are also teasing the new Overwatch hero. A tweet posted earlier today seems to suggest that the 28th hero to join the game’s roster will be a hamster piloting a giant mech, one who could very easily be Hammond, a character that’s been regularly teased in the game’s lore.