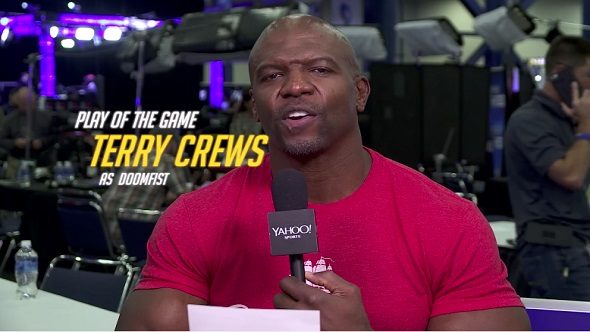 We’ve seen him appear on the Blizzard campus, we’ve seen him tease it via Twitter; Terry Crews loves stirring the pot when it comes to him appearing as Doomfist in Overwatch. In a mock audition with Yahoo! Esports, Crews read for the part of Doomfist and he certainly packs a punch.

Check out everything we know is coming to Overwatch right here.

While Doomfist has featured in Overwatch ever since the first cinematic trailer back in 2014, we’ve had few in-game hints about the character. There are posters for a Doomfist exhibit on Numbani, his gauntlet appears in the payload for that map and there is a Reaper voice line about him but that’s about it really. It’s safe to assume that Doomfist would be a melee hero and seeing as he has “the power to level a skyscraper”, I could see him having an ability which allows him to break through obstacles like Mei’s ice wall or even Reinhardt’s shield wall.

With Crews being a former NFL linebacker and Blizzard being no stranger to sports-themed events, some have been speculating that a potential Doomfist reveal could happen sometime around tomorrow’s Superbowl. However, with a 30-second ad costing upwards of $4.5 million and companies usually announcing that they are releasing a special Superbowl ad ahead of the event, I doubt we’ll see anything from Blizzard during the half-time show.

In any case, I think there would be actual rioting if Terry Crews did not voice Doomfist now. With it being three months since Sombra’s release, we are overdue for a new hero so keep your eyes out for potential Doomfist related news coming soon.