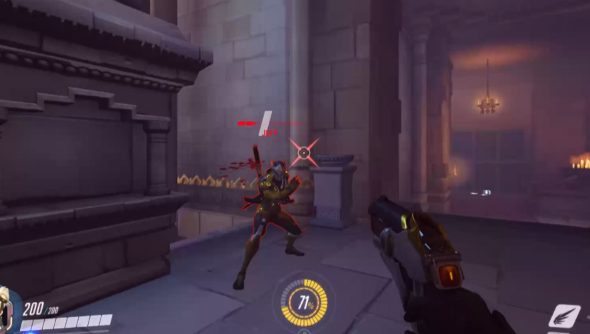 Overwatch’s dodgy aiming is becoming a bit of a theme as hitboxes and now trajectory becomes a target for player criticism.

Odd shots aside, Overwatch is still one of the best PC games of 2016.

As Blizzard’s first shooter continues to pick up steam – with more than 7 million players already in the game – some are finding slightly strange behaviour in the core mechanics of shooting people.

The latest of these, as pointed out on Reddit and in the official Blizzard forums, cause player shots to be sent completely vertically when near the limits of aiming up or down.

The degree of play between aim and shot trajectory seems to be only a few degrees, and at the extreme edge of vertical rotation, so at best it is an edge-case. But at worst this causes player shots to miss at a critical time, say when Pharah has begun a barrage almost directly above you, but not quite.

As Darkstar notes in the video evidence (and you can test for yourself by heading into a practice match) projectiles aren’t the only ones affected by this as hitscan weapons – ones that immediately apply damage at a point on the bullet trajectory intersect – also appear to miss through a few degrees.

Programmers in the forums have suggested this is a result of a vector mathematics problem called Gimbal Lockingwhich can cause problems with rotational objects in 3D space once angles approach a limit (such as directly vertical) and two of the planes of rotation overlap.

The bad news is this isn’t the only strange behaviour beleaguring the online shooter, which can get pretty frantic at the best of times.

As seen above, there are potential hitbox issues with Hanzo’s arrow and Mercy’s pistolwhen fired at the heads of stationary targets.

Blizzard has gone into great detail about the server and client-side magic they employ to ensure hit detection is fair, using shooter-favoured interpolation delays to anticipate shots landing on targets.

But these are non-moving targets, requiring no prediction of movement or intercept and clearly aimed past any part of the model which should register a hit.

Jeff Kaplan was eager to explain that Blizzard is always listening to feedback in a recent Eurogamer interview, and ready to make changes if the fanbase is unhappy.

“Hopefully they’ll know that if something like the queuing system isn’t working how they like it,” Kaplan said. “They realise that instead of just being angry at us, they’ll know that Blizzard actually listens to its community, they’ll probably make changes based on the feedback.”