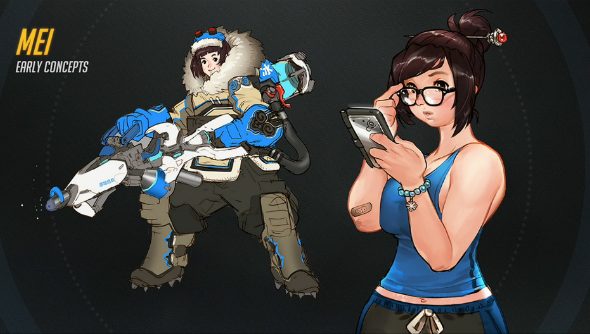 It’s been 11 days since the Overwatch closed beta began on PC. In that time there have been more than 130,000 games played, and the game has had a confirmed launch window for PC, Xbox One and PS4 of next spring. Today’s further raft of announcements saw three new heroes being added to the roster, and the design team were at BlizzCon to walk us through them.

Want to hear more from designer Geoff Goodman on Overwatch’s balancing act? Here’s an interview and hands-on with the new FPS

Some more stats from the short time in Overwatch’s closed beta include an average match length of 7 minutes and 34 seconds, Pharah is the most played hero and Symmetra has the highest win rate (to absolutely everyone’s surprise as they have barely even heard of the support class). Game director Jeff Kaplan also elaborated on the Xbox One and PS4 plans, by saying it was a day one design goal to have it playable on console.

“Designing it so it felt great on console controller really helped enforce our philosophy of elegance, due to the number of buttons,” Kaplan said. He also laughed about no-one really catching onto the fact it would be a console release when the beta had to have controller auto-aim assist patched out of it shortly after launching last week when it was accidentally left in the build.

The PC and console ecosystems will exist independently of each other for the purposes of matchmaking, but when asked about e-sports, Kaplan said they were looking at all platforms as equal. “We know there are players of amazing skill level out there on every platform,” he said. “We want to make sure there is support coming for every one.” Sadly, Mac will definitively not be one of those platforms.

Happily, the new heroes were given form after weeks of attempting to put together a jigsaw where all the pieces are obscure blog posts. Mei, a climatologist, Genji, Hanzo’s cybernetic ninja brother, and D.va the previously announced pro-gamer-turned-mech-pilot. There was a considerable amount of backstory and design planning for each and, as you might expect from any Blizzard property, a fair amount of self-referential cross-linking.

All 21 heroes have now been revealed for the launch of Overwatch, and Kaplan is fairly adamant that this will be the final number for quite some time, as there are no others in the pipeline right now.

Starting with Mei, Kaplan and the game’s lead designer Geoff Goodman, discussed how the character’s backstory fed back into her design. As a scientist of the all-encompassing Overwatch project, she was stationed in Anatarctica, but an ice storm cut off supplies so she was forced to fashion a cryostasis device so save her colleagues. It worked, but they weren’t rescued for many years until after the Omnic crisis was over, and as a result, everyone but her died. To add to this harsh awakening, her entire science network was abandoned, so she now travels the world reactivating Overwatch labs to download their meteorological data, with her pet drone Snowball.

As for how she plays in-game, Mei is a defense character who uses her Endothermic Blaster to spray foes with a stream of freezing coolant. The stream slows them and, if kept on a foe long enough, freezes them in place for a while. The secondary attack is a large icicle which deals damage without the slow. If under attack, she can use her first skill Cryo-Freeze to turn herself into a block of ice, preventing damage and healing herself. Or, she can create a placeable Ice Wall, which can also push people up to higher ledges and be climbed by mobile characters. Finally, her ult sees Snowball create a Blizzard (geddit?) an AOE of freezing, slowing damage, which stacks with her basic attack.

Joining Mei is D.va, the ex-StarCraft pro (Kaplan jokes, StarCraft 6) who became a MEKA (Mobile Exosquad of Korean Army) pilot to defend her homeland from essentially a robotic Kaiju. The Omnic crisis created a massive robot which could control other robots in the Korean sea. So they needed human pilots inside their mechanised war bots, which obviously means they’d need the micro skills of a pro gamer.

D.va, despite her small stature, is a tank thanks to her mech suit. The mech has dual shotgun blast miniguns that never run out of ammo, short range and high damage, but slow the mech’s movement while firing. To compensate for that movement, she has booster jets that allow short, controleld flight on a very short cooldown. To fulfill the tank role, she also has a Defense Matrix which shoots down all incoming projectiles in an area while active, even Pharah’s ultimate rocket barrage. And her ultimate causes the mech to self destruct in ‘the biggest explosion the game can allow’ after ejecting her. On foot, pilot D.va is armed only with a pistol, fairly rapid firing but low damage. When she has built enough charge on her ult though, she can call in another mech.

Finally, Genji is Hanzo’s estranged brother. The two are part of the Shimada clan, an ancient family of ninjas who are now more like a Yakuza family. Genji was the playboy brother, going out drinking and partying, while Hanzo trained to take over the family business. On the death of their father, Hanzo inherited whatever business that was (probably running arcades if the Hanamura map is anything to go by) and the family elders demanded something be done about Genji bringing dishonour to them. So Hanzo challenged him to a ninja duel, won and then left him for dead.

Overwatch aren’t as cold-blooded as Hanzo, and Mercy – having stumbled on Genji’s lethally wounded body – patched him up with cybernetics and put him to work taking down the Shimada clan. Assumedly because Overwatch are in the home console business and that arcade had to go. So now Genji can run up walls, like his brother, but also do a double jump in mid-air because cybernetics. His primary fire are shurikens, which he throws in a fan pattern for his secondary, and his first ability is being able to deflect incoming enemy fire with his sword to wherever he is aiming. Swift Strike also allows him to blink forward through foes and doing damage to them, they then take additional bleed damage and if they die as a result, he can instantly use it again. His ultimate is Dragonblade, where he really puts the sword to use, doing lethal damage to anyone in striking range for about 10 seconds.

From a design perspective, Genji and Hanzo were the same character until they began thinking along the lines of simplicity. His katana, bow and shuriken were then considered overkill, and they split him in half to form the two brothers. Also, two ninjas. Can never have too many ninjas.