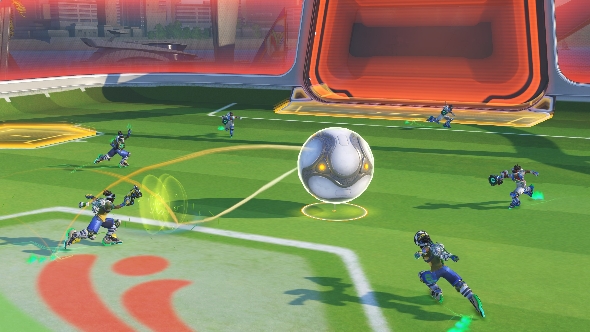 As you may know if you read websites that focus on something called ‘the real world’, there’s quite a big sporting event happening in Rio de Janeiro right now called The Olympic Games. The official videogame of the Rio 2016 Games is Mario and Sonic at the Olympics, but it’s only available on those Japanese consoles for children. That hasn’t stopped other developers stuffing the Olympics into PC games though, even if there’s absolutely no reason to.

Even one of the best PC games of 2016 couldn’t resist the Rio bandwagon.

Here we present to you ten titles that have shamelessly piggybacked the Olympic Games, with examples ranging from sports-themed character skins to… name-dropping Rio in a press release. Yup, no opportunity is left untaken. 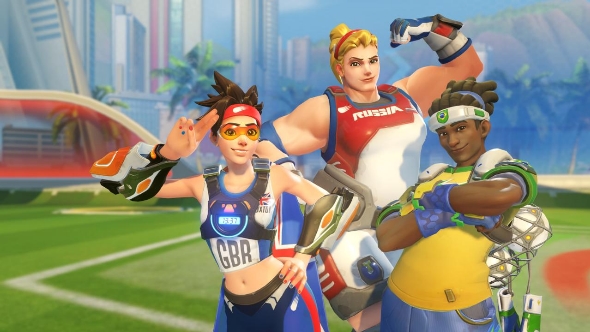 International law dictates that if you’re going to be shameless, it’s mandatory to at least put some effort into it. Thankfully Blizzard got that memo, and so Overwatch’s Rio-themed loot boxes are actually… kinda ok? During August every loot box purchased or awarded for levelling up is painted in Olympic colours and contains at least one sports-styled item, such as one of the swish Legendary character skins, a medal-holding victory pose, or just a naff flag player icon.

Lucioball is the real bronze medal-winner though (piggybacking events are never going to get the gold). It’s a month-long Weekly Brawl that’s basically Rocket League with teams of Lucios. Everyone’s favourite DJ mercenary can push the giant ball around the pitch with his sonic gun, and – as logic would dictate – the aim of the game is to score goals. It’s a simple but fun distraction from the main game, and also a completely and utterly shameless tie-in to an event that has about as much in common with Overwatch as I do with Robert Mugabe. 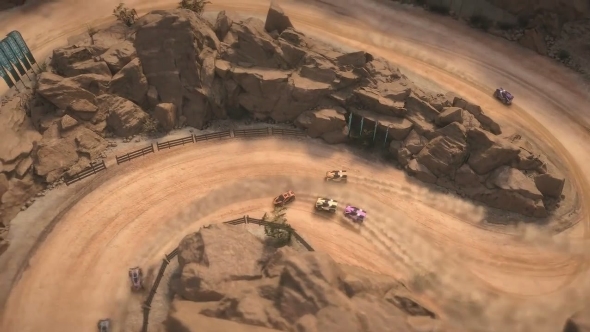 So, you’ve got an update for your game on the way, and you’re looking for a way to jazz it up when you announce it to the world. Why not use the Olympic Games as your hook? After all, it is the jazziest event of the year (aside from the Birmingham Mostly Jazz Festival, of course).

“Right in time for the start of the 2016 Summer Olympics, players are urged to race for glory with the addition of new Weekly Challenges,” begins the announcement for VooFoo Studios’ latest Mantis Burn Racing update, which then goes on to say absolutely nothing else about the international athletics event. Pray tell, VooFoo, how does the 2016 Summer Olympics tie in to Mantis Burn Racing? Those are quadrennial challenges, not weekly!

Nothing shouts ‘Athletics!’ like heavily armoured artillery platforms, so naturally Wargaming’s flagship series has an Olympic tie-in this month. World of Tanks’ mobile version is host to the Blitz Games: a series of vaguely Rio-themed tank activities such as ‘Tankwondo’ (a game that appears to just involve ramming tanks into each other). It is, as you can imagine, absolutely inspired.

Play enough of the special events and you can unlock the Rio-themed skin, which makes your tank look as if it had an accident with an industrial-sized can of silly string. A fetching and sensible approach to camouflage, we’re sure you’ll agree.

The ‘Olympic’ update for Fractured Space was initially a confusing affair. What could that mean? Summer games in space? But athletics fundamentally require gravity to work. Perhaps developer Edgecase were going to introduce spaceship sprinting?

No, no. Calm down. It’s just skins for spaceships in the colours of some national flags. And when we say ‘some’, we really mean ‘barely a handful’. Represented are the USA, UK, France, Germany, and Russia; just five of the 207 countries present at the Olympics in 2016. There’s not even a Brazil skin, and they’re hosting the games! Perhaps in the far future, when war is fought in five-a-side orbital battles, everyone’s forgotten what Brazil was? 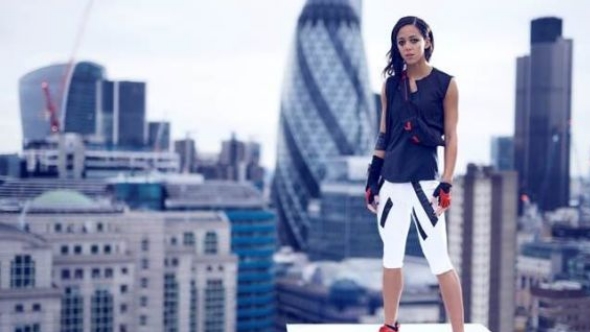 Months before the Olympics had got started, EA were eyeing it up as a marketing opportunity. Back in June they were about to release a game that featured a lot of running (it was called Mirror’s Edge Catalyst. Remember that one?), so they hired UK athlete Katarina Johnson-Thompson to dress up as a runner and deliver copies of the game to players. Because, y’know, we need to get used to a future where Amazon Prime drivers aren’t a thing.

At the time Johnson-Thompson was just an Olympic ‘hopeful’, with Team GB yet to be decided upon. But EA still saw her as a shining opportunity to advertise Mirror’s Edge with, regardless of how well prize-winning athletes fit the message of the game. Would they even have the Olympics in Faith’s nightmarishly clean corporate-ruled future? 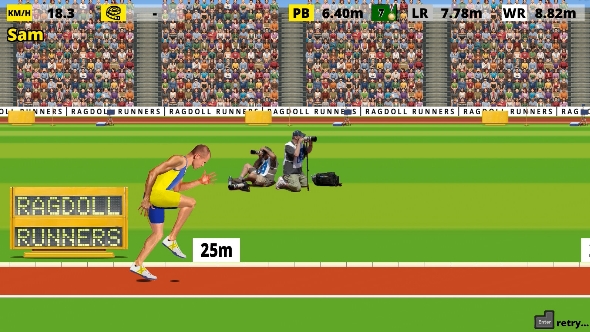 You remember QWOP, right? The crazy running game you used to play on the computers at school when teachers weren’t looking. Well, there’s now this game called Ragdoll Runners, which is a bigger version of QWOP that you have to pay for. It was, of course, released a couple of weeks before the Olympics kicked off, and made sure to let people know in its launch press release.

“Ragdoll Runners revolutionises the athletics game genre and is released just prior to the Olympic Games in Rio” proclaims the statement. And while Ragdoll Runners is certainly about athletics, it’s not exactly a Rio-themed game. No searing heat to endure, no questionable stadium issues, nor any zika virus to fear. One can’t help but think that the timing of this release was not a coincidence.

Requiem: Rise of the Reaver 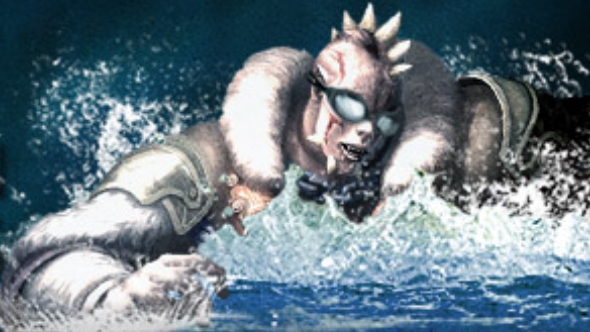 MMOs are well known for their seasonal content, and little-known Requiem has, of course, made the Olympics its theme of the summer. But wait, we’ve got another bronze medal winner! The Ethergian Olympics actually do have something in common with the Rio games, coming in the form of races, time-trials, and swimming competitions. (There’s also a Battlefield Tournament if those are a bit too light on the violence for you.)

Gold, silver, and bronze medals are awarded to the winners of the events, which translate into periods of premium subscription and in-game currency, so there genuinely are prizes to be won for being good at something, just like in the real Olympics. That makes Requiem the least shameless game of our list, so we’ll let it off the hook (a little). 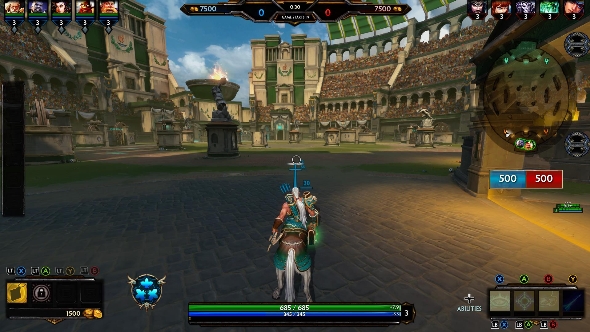 With its godly theme, Smite is arguably one of the better suited games to jump on the Olympics bandwagon, what with the original tournament being an ancient Greek thing. Smite sadly won’t be transporting your gods to Mount Olympus, but has instead redecorated the standard arena to look like a classic civilisation tournament ground. There are even running tracks that will increase your character’s (and minions’) speed when used, so well done Hi-Rez for including some kind of vague athletic gameplay feature.

Alas, there’s no shot putting or synchronised diving, so the effort certainly wouldn’t be graded 10 by the gods of Olympus, nor the judges on the panel at Rio. But hey, at least it’s not an Olympic-themed press release. 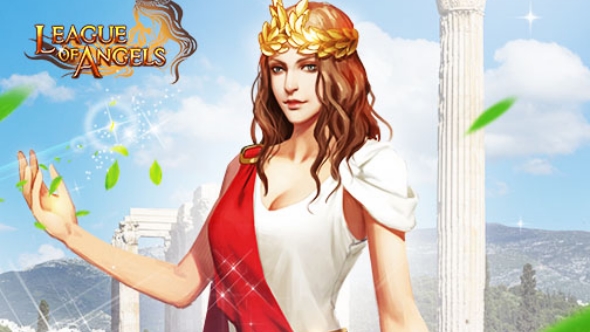 Heard of League of Angels? Of course you haven’t. It’s one of those games that appear in side-bar website adverts that attempt to attract people in using very specific assets. It’s name is obviously an attempt to riff on the popularity of League of Legends, and it’s jumping on another bandwagon this month with the Olympics.

Of course, that’s an excuse for new Olympic clothing, which apparently honours the ancient Greek Olympics, and the addition of Olympics-themed components in the game’s city-building sections. These new tidbits promise to greatly enhance your power, so there may be some worth in riffling through the Olympic Mystery Gift Boxes, should you be able to stand the grind. 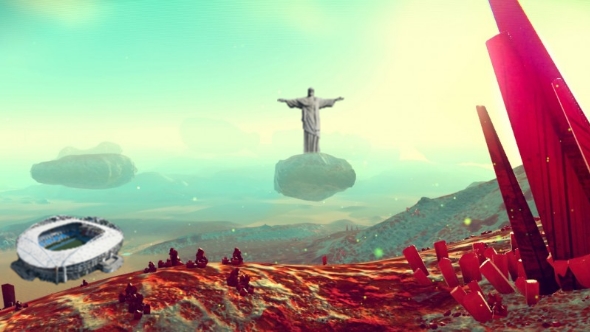 So No Man’s Sky is out now, and everyone thinks their goal is to get to the centre of the universe, right? Wrong. Until August 30, Hello Games have a planet on the server that is completely Rio-themed. As if there wasn’t already enough hype for No Man’s Sky, Hello had to go and jump on the Olympic bandwagon too.

The garish celestial body, which is called Riotopia and cannot be renamed, comes complete with green water and absurdly hot temperatures, but the key thing to look out for are the animals dressed in Nike-branded sports gear and the 1:1 scale Olympic Village, which has been built according to the architectural plans used for the actual Rio stadiums.

It’s literally the only piece of non-procedural content in the game, and also home to a gold-plated spaceship with five jet engines arranged like the Olympic Rings. If you want to be a massive show off, then you’ve got less than a month to try and find it.

Ok, one of the above entries is a massive lie. We’ll let you make your own mind up about which one.

Seen any other shameless Olympic PC game tie-ins? Let us know your spots in the comments.