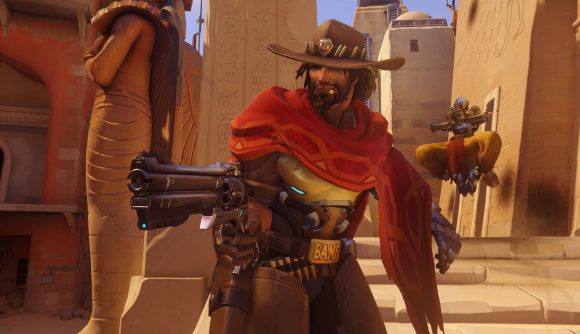 Who is Shroud? Videogame streamer Michael “Shroud” Grzesiek made his name as a Counter Strike: Global Offensive pro player and plays various titles such as Apex Legends on his Twitch channel, has tried out a few matches of Overwatch – and taken to it pretty well. This weekend Shroud had a go at a few rounds of Blizzard’s multiplayer FPS – and scored a Platinum level finish.

As reported by Dotesports, the streamer, who recently indicated that he’s not currently thinking of returning to competitive gaming, tried out a few ranked placement Overwatch games, racking up an overall Skill Rating of 2,589. Based on Esportstales’ information on the game’s competitive rank distribution, this score put Shroud in the Platinum band.

Given that he’s new to the game, that’s a decent finish. However, it sounds like the streamer wasn’t too worried about the outcome – as Dotesports highlights, Shroud wasn’t initially sure what his Skill Rating number meant, and didn’t appear to mind too much anyway.

For his Overwatch outings, Shroud picked characters that suited his FPS background, choosing some big damage-dealers like Soldier: 76, Tracer, and McCree. He had some particular success with Soldier: 76, at one point achieving a kill streak of five, likely gaining a benefit from the familiarity of the character’s automatic rifle, which plays to Shroud’s experience and precision-shooting skills.

It sounds like we could be seeing more Overwatch on Shroud’s channel, based on his reaction to the game. He said “this game is something”, and although he said he wasn’t having a lot of fun playing it as such, he wanted to play it again.

With a decent start at Platinum, perhaps we could see him get a Diamond score or above in the future.