As if the main Sombra-related ARG weren’t convoluted enough, it seems Blizzard have been seeing a curlicue on the side, only to have it crash under heavy traffic.

Solve these (root16) obscure clues to unlock our list of the best multiplayer games on PC.

The Sombra ARG has been running since the reveal of Ana, Overwatch’s last new character, with thefirst hintsof the mysterious hacker being discernible in Ana’s lore video. That’s way back in July, meaning that we’re the better part of four months into Blizzard’s twisted little game.

But single-frame subliminal messages and countdowns to nowhere weren’t enough for Blizzard, as evidence has now emerged of another Sombra-related ARG on the Overwatch Discord channel.

There, Overwatch fans saw a different version of the live Reddit thread where the main ARG was running in real-time, with Sombra attempting to hack the website of LumériCo, an energy company in Overwatch’s universe. The Discord version of the ARG started spouting script kiddie gobbledegook, with the clear implication being that Sombra had hacked it. She invited viewers to help by typing “./assist” in the chat. 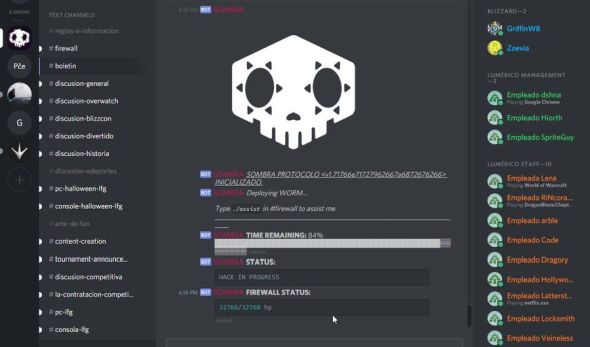 During this game, the admins of the site posed as LumériCo employees, responding to direct messages by deflecting in corporate-speak.

So far, so thematically fun. But it all went wrong when user sinebiryan posted in the Reddit thread that something curious was happening in Discord. Presumably, this prompted a flood of traffic, because it was shortly thereafter that the Discord channel crashed.

Given the hacking-themed nature of the ARG, there was understandable confusion among users who thought that the site going down was somehow part of the game. This turned outnotto be the case when the channel recovered, revealing an apologetic message from the admins. Here it is in full:

“Hey guys, unfortunately things didn’t go as planned. Originally we intended for SOMBRA to hack into LumeriCo using the power of our users to help. Unfortunately the server load was maxed out quickly and we weren’t able to handle the traffic.

“Ultimately we’re humbled by your guys’ dedication to the ARG. Again, we apologize we weren’t able to make it as fun as we had hoped.

The admins haven’t yet said what, if anything, the mini-ARG would’ve revealed, or what its role was as a component of Blizzard’s main ARG. But it’ll all be moot in a few days, as surely,surely,Sombra will finally be revealed at BlizzCon this weekend. We’re in attendance, so catch all the latest news by following ourBlizzCon tag.