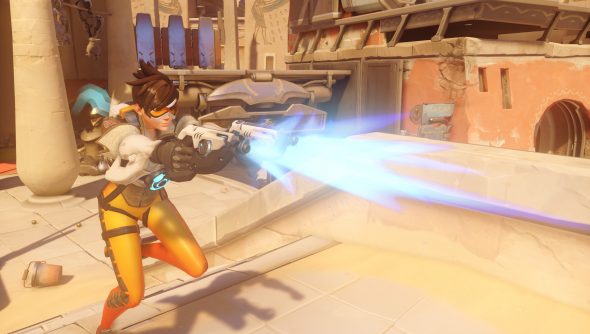 I’ve never really liked my ears. They stick out a bit too much, and I’m vain enough for that to be a problem. Well, it used to be a problem, but thanks to the latest trailer from Overwatch, it isn’t anymore. My ears are now no longer attached to my head, and I’m stomping on them while typing this.

What on Earth would inspire me to rip parts of my body off? It will be clear when you watch Blizzard’s Tracer demo, showing a match from the teleporting character’s perspective.

Now that you’ve watched it, I’d like to apologise for subjecting you to that heinous attempt at an English (specifically London) accent. But, really, it’s Blizzard that should be apologising.

Despite the painfully terrible VO that would make Dick Van Dyke cringe, the Tracer does appear to be rather nifty, unless you get motion sickness or migraines. She does bounce around a lot, like a hyperactive infant with the ability to teleport.

You’ll notice that she doesn’t just teleport, though. She also appears to be able to briefly rewind time, porting her back to an earlier location, which also returns her health and ammo.

It’s unfortunate that her ultimate ability, which should be the coolest, is just a bomb. She throws a bomb and then it blows up. Maybe her other powers were just too awesome and Blizzard felt that they needed to tone it down a bit. Oh well!