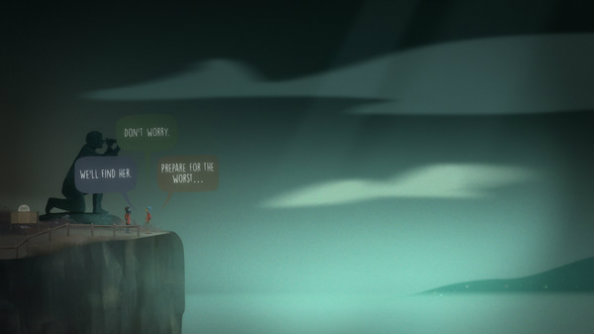 Oxenfree looks like a belter. It’s both teen drama and chilling horror, placing you in control of Alex as she takes her stepbrother to an island party that inevitably goes horribly wrong.

Will Oxenfree be good enough to make it onto our list of the best indie games on PC?

The launch trailer shows a foggy boat trip, awkward campfire introductions and creepy apparitions. It has a wonderful 2D art style that somehow manages to be both gloomy and beautiful. Yeah, it’s gloomily beautiful.

Gameplay revolves around multiple choice conversations, as well as light platforming and puzzle solving. Your conversation choices will affect your relationships, and perhaps even the fate of Alex’s friends.

“Oxenfree is a supernatural thriller about a group of friends who unwittingly open a ghostly rift,” says the Steam blurb. “Play as Alex, a bright, rebellious teenager who brings her new stepbrother Jonas to an overnight party on an old military island.

“The night takes a terrifying turn when you unwittingly open a ghostly gate spawned from the island’s cryptic past. How you deal with these events, your peers, and the ominous creatures you’ve unleashed is up to you. YOU determine every aspect of Alex’s story while exploring Edwards Island, uncovering the base’s dark past, and changing the course of your friends’ lives.”

Apparently much of the game’s events are inspired by little known events from World War II, which is an interesting prospect.

Obviously the game is heavily story-based, but it has the acting talent to really sell it to you, featuring “voice talent from The Wolf Among Us, The Walking Dead, Borderlands and more”.

Oxenfree is out now and you can pick it up on Steam for £14.99.Check out the spine-chilling launch trailer below: