Every PC gamer has learned to read level design: the language that tells us not to try the knob of a door we know to be painted on, nor to poke at the mug most likely glued to a desk. It’s a fluency that saves us time in scanning a room for its scant points of interactivity – but leaves no room for a sense of wonder at what might be possible.

Looking for some time alone in the void? These are the best PC space games.

Left to your own devices in the crew quarters of Rama Industries Research Base M, by contrast, you might pick up a dart. Chuck it at the board on the other side of the living room, and it’ll stick. Slot a coin into the mouth of a vending machine, and it’ll belch out a Rama-brewed can of beer. Pop the beer into the open-plan kitchen’s microwave, and it’ll crackle away merrily. Playing Pollen, a first-person VR adventure set on Saturn’s most atmospherically-promising moon, is a process of unlearning.

Finnish indies Mindfield Games have been touring events in recent months, demoing the game to anybody willing to strap an Oculus Rift to their skulls. The studio have observed players with the close rigour of anthropologists, and refined their tactile spaces in response. If there’s something an untrained newcomer expects should be possible using the objects they find scattered around the base, then Mindfield implement it once they get home. Hence the microwave. 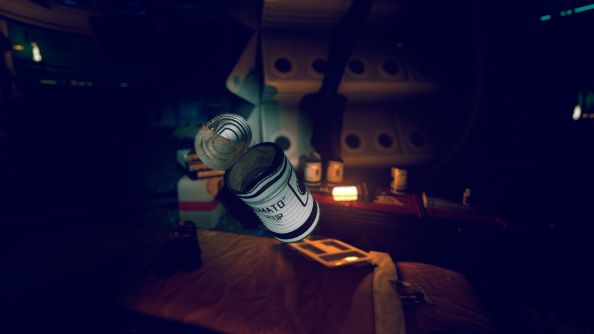 “It’s not relevant, but it’s something that should work,” reasons project lead Olli Sinerma. “And it’s pretty funny: people have a lot of the same behaviour.”

Take the two strangers sat side-by-side at PAX Prime – each enclosed in their own VR world, each stuffing every object they can find into a latrine and pulling the handle. As both toilets flushed, Sinerma saw with no small profundity that there was “something in human minds” that compelled them to play with the limits of their environments.

Two years ago, Mindfield came to the same realisations as everybody else experimenting in VR. Yes, horror works really well – perhaps too well – and seated cockpit experiences feel like second nature. But they decided to plump for something less obvious. 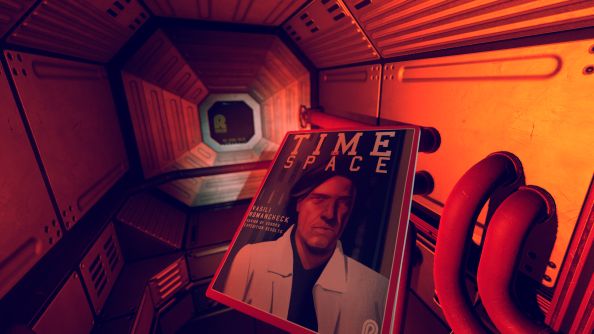 “That is pretty much when we started to figure out the problem with current first-person games,” says Sinerma. “You have this huge world where all the machines are just boxed props that have textures on them, and nothing seems to work. It’s like you’re walking in a movie set in a sense.

“What we decided to do in Pollen, seeing as you’re inside the game when you’re wearing your headset, was make everything totally interactive. If you see something you should be able to pick up in the real world, you can in ours.”

Mindfield willingly sacrificed scope in pursuit of granular detail. Pollen would be set on an isolated base, they decided: a moon station as Asimov or Clarke might have imagined it. In the game’s fiction, a united space race gives way to corporate expansion somewhere after 1963. And by alterna-1992, you’re taking a job as a technician on the human frontier – Titan in this universe somewhat equivalent to the Arctic Circle. You’re several weeks’ travel from Earth, and have been cooped up with the same crew for two years by the time Pollen begins.

“It was pretty much like playing a Sims game with scriptwriters,” recalls Sinerma. “Where we were thinking, ‘If two years of time has passed, what kind of relationships would have developed?’”

You won’t see your colleagues, for disquieting reasons as yet unknown – but you’ll turn over their belongings voyeuristically in your hands, parsing their personalities through Kubrickian show-not-tell. Gone Home is a clear influence, but Mindfield have forgone all narration in favour of leaving the player to figure it out for themselves.

No one object tells a whole story – but connect a crew member’s brain scans in the doctor’s office with a hidden postcard in their room and you’ll soon wind up an “archeological Indiana Jones in space”.

“Of course the fun thing is that you can start to think, ‘This is how the story goes’, because you have not found all the objects,” says Sinerma. “But then you find something that contradicts.” 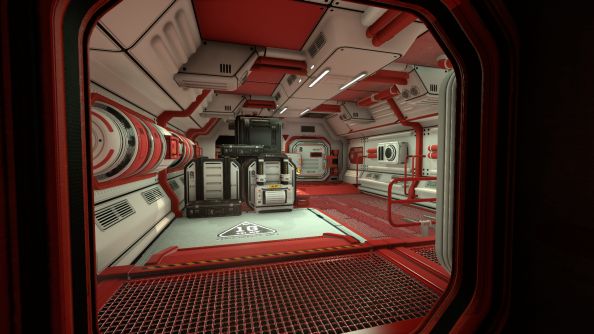 There’s an intentionally Soviet-like, functional drabness to the tools and toilet paper manufactured by Rama. But Mindfield plan to colour Research Base M’s interpersonal spaces with puzzles – perhaps better described as logic problems, linked up to a few possible solutions. As with every other aspect of the game, if you think you ought to be able to do it, you probably can. Soon enough, Mindfield hope, players will forget to think about level design at all.

“I’m not observing my character running on the ground. I’m not just sitting in a chair playing a game,” enthuses Sinerma. “I’m actually inside the game world, trying to move in it exactly like I was in a holodeck.”

If there’s one place the studio are prepared to break the illusion, it’s to give a reverent nod to the Trekkian birthplace of the VR dream.