When you think of dungeon crawler games what do you see? The term usually conjures a specific image in the mind: an isometric perspective, looking down on shadowy netherworlds lit up by a relentless stream of neon spells, all of it strewn with loot from a thousand fallen enemies. You could be thinking of any game in the dungeon crawler genre but it’s more likely that you’re actually just picturing Diablo.

Blizzard’s game has been synonymous with ARPG dungeon crawling for 20-odd years now. Mad Head Games, the developer behind Pagan Online, understands this hierarchy and therefore doesn’t try to hide its reverence for the game at the top. But by bringing in Slavic influences and brisk pacing this team is also looking to carve its own identity into our collective vision of this genre.

Pagan Online’s overarching story throws you and up to three other players into a crossover universe starring gods from various pre-Christian mythologies, who you’ll be fighting both for and against. It’s far from a linear story however, and Mad Head Games publishing director Yaropolk Rash described it to me as “a series of adventures like Star Trek, where the whole thing goes from one circumstance to another with every new Battle Chapter.”

It’s a world that blends the high fantasy of dragons, mages, and untold legions of ghouls with the relatively uncharted world – in games, at least – of Slavic mythology. You’ll face off against arcane gods like Veles, God of the Underworld, and more nightmarish entities like Triglav – a three-headed Slavic god. It will bring in deities from even further afield too, such as Aztec god of drunkenness Macuiltochtli, among others. What’s great about this pre-Christian deific theme is that it’s a deep well to tap into, making it perfect for a long-running service game, as is the plan for Pagan Online. 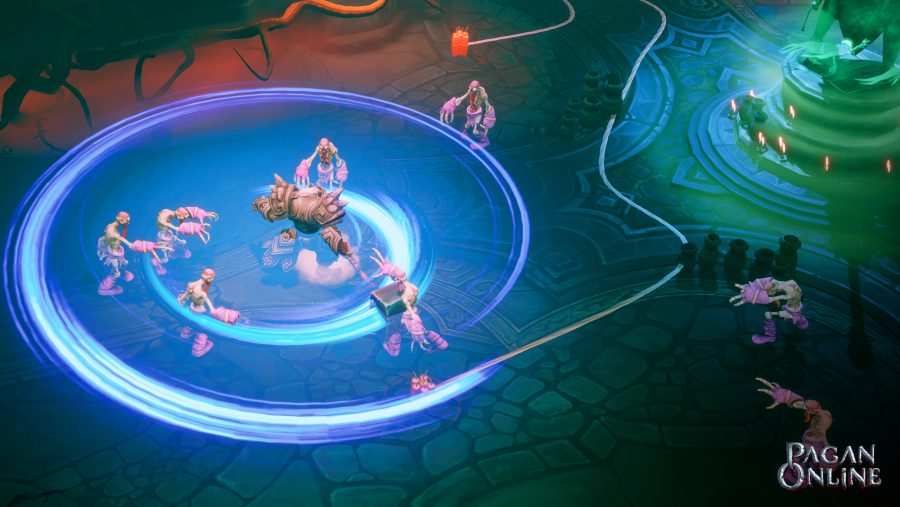 Confidence in this area comes from the fact that Wargaming is acting as publisher and that means bringing over expertise from years of running service game giant World of Tanks. But don’t let this fool you: Pagan Online will be a premium game, but from what we know so far will be monetised further by Battle Chapters, which are packs of new stories and dungeons that will be released quarterly.

The clean, cartoony bones of skeletons look fun to send clickety-clacking to the ground

Back down on the ground, Pagan Online is straight up hack-and-slash dungeoneering. The base game has a cast of six characters, each of which will eventually – through experience and character upgrades – have seven abilities assigned to cooldown timers. Rash stresses that Pagan Online “doesn’t stick to regular D&D-type classes,” and while you can play as a bruising barbarian berserker or a swords-and-sorcery paladin, there are also more unusual options.

One of these is a beastmaster type whose special ability lets you toggle between controlling him and his pet bear. There’ll also be a bard who defies his usual support role in favour of getting his hands dirty. It’s unconfirmed whether this entails smashing your mandolin over the heads of your enemies like some mythological backyard wrestler, but we can hope. 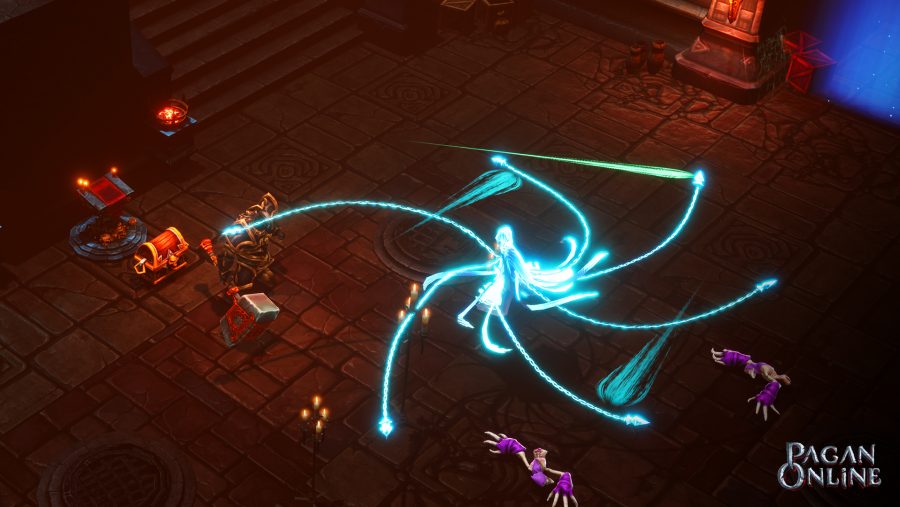 These characters can be customised with items that imbue their attacks with elements like fire, thunder, and water, all of which have their respective rock-paper-scissors interactions. It seems a bit of a stretch to call this a break from existing ARPG formulas as Rash suggests to me, but the point is it lets you create diverse iterations of the same character, adaptable to the unique enemy types and bosses awaiting you in each arena.

Pagan Online’s colourful dungeon runs will be capped off by boss fights against all kinds of pre-Christian gods, ranging from Slavic myths to Mesoamerican Aztec deities. If the success of the new God of War taught us anything, it’s that mythological reinterpretations are a lot of fun.

Something that jumped out at me more was the co-op combo system, which will allow you and your companions to sync up and deliver special three and four-step chain attacks that require specific numbers of players to execute. You’ll need these moves to complete certain encounters in the game, offering an extra layer of teamwork on top of the custom combos that dedicated players will discover and invent as they play.

There’s a question that comes out of this required online co-op play. To answer it: yes, you’ll need an internet connection to play Pagan Online. Rash tells me that this is how things stand “for now.” Mad Head will be listening to players post-release, and is prepared to make revisions to a game that’s by far the studio’s biggest project to date. Again, the presence of Wargaming as overseer should help steer the game in the right direction. 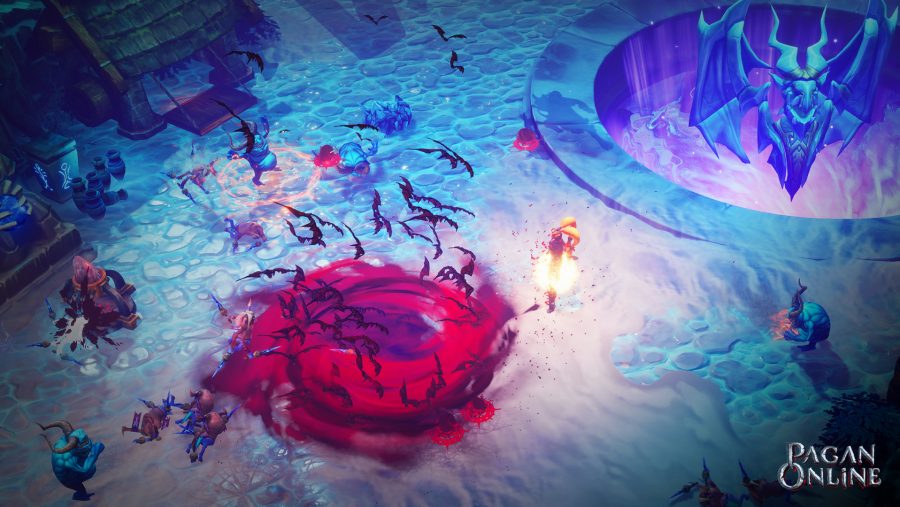 Pagan Online’s multiplayer modes will be led by the classic dungeon run, in which you wade through hordes of high-fantasy enemies – including skeletons, whose clean, cartoony bones look particularly fun to send clickety-clacking to the ground with the paladin’s hammer. At the end of each run, if you make it that far, you’ll face off against one of the deities.

Or if you want to keep things simple, you can jump into the survival or last stand modes, or a number of others which the game’s arenas are designed to accommodate. Crucially, while many of the modes are built around multiplayer, you’ll always have the option to go it alone, with the game scaling its difficulty accordingly.

By cutting out the RPG busywork like shop runs and NPC chit-chat, and providing tight, time-limited levels ideal for quick sessions, Pagan Online could be best described as an ARPG for the MOBA generation. With the Diablo series currently digging its hooked claws into the free-to-play market perhaps now is the perfect time for a proper premium dungeon crawler for PC to make an impression.