If EA or Ubisoft R&D were to develop a machine capable of algorithmically combining all the crucial elements of the current PC gaming zeitgeist in a single product (and who’s to say they’re not working on one…), the result would be something like Paladins.

This Frankensteinian team shooter from Tribes revivalists Hi-Rez puts players in control of champions with important abilities tied to the Q, W and F keys and asks them to capture control points, before escorting a siege engine to the gates of their enemy’s castle. Meanwhile, champions level over the course of a match, amplifying their abilities with buff cards. Then, post-game, players open chests to collect more cards for their decks.

We’re only one Souls-style campfire system away from ‘contemporary cool bingo’. But Paladins has a rhythm all of its own: a dance of death I’ve had pretty good fun with in the beta. Call it Boogie Knights. 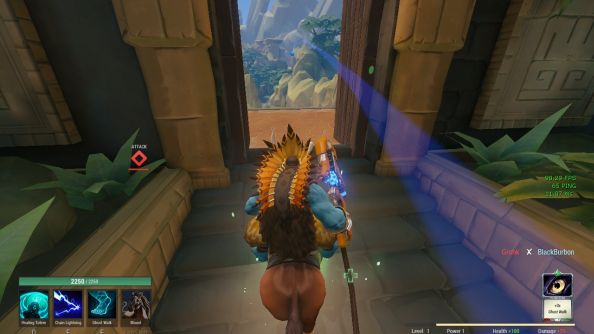 Looking to make a leap into MOBA-land? These are the best League of Legends champions for beginners.

Hi-Rez have sketched out a quasi-fantasy setting vague enough to host a range of big (read: mildly irritating) personalities straight from the MOBA codex. There’s a goblin piloting a robot co-inhabited by the soul of a snobby elven king; an anthropomorphic fox with a Disney smirk; a huntress with a bird of prey for a bezzie mate; a bright blue orcish shaman; and a questionably-proportioned stealth specialist who sits on her horse in such a way as to invite leg cramps.

Everybody gets a horse, and everybody needs one. The beta’s Temple Ruins map takes in large tracts of green land, broken into discrete paths by trees and boulders. The simplistic, Warcraftian crags don’t really stand up to close scrutiny, but you’ll speed by them on your way to whichever of the two control points the game has deemed to be disputable. 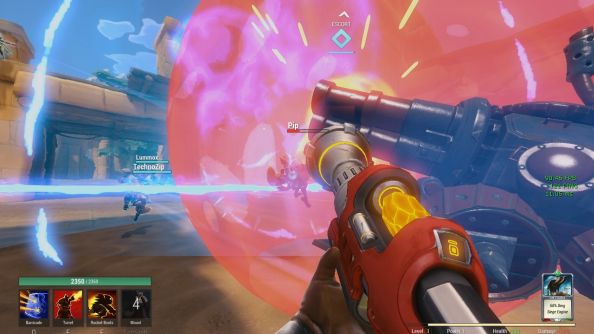 The mounts don’t play a part in the combat: as soon as you take any damage, they’re folded away into whatever horse pocket the champions conceal about their person so that the shooting can get underway.

You’ll see straightforward machine gunners and flamer assault specialists running about, but there’s more fun to be had with the heroes who modify the playing field in some way – planting area-of-effect healing totems, cracking open turrets or blocking off routes with temporary walls. Those abilities become especially effective around contested points, where the terrain tends to narrow and push upward, giving players vertical platforms to squabble over.

When a point is captured, a cannon on wheels spawns – and it’s all you can do to keep pace with the siege engine as it makes its way over to the opposing team’s fortress and begins blasting chunks out of its front door. The attackers do their best to fend off defending fire and help bring down a series of three gates, but you can expect to take at least a couple of runs at the ramparts before breaking into the final vault and claiming victory. 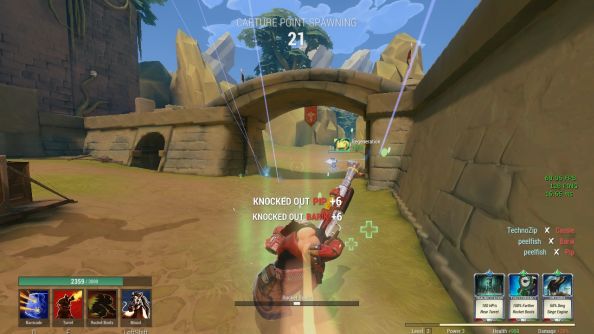 It’s when the siege engine’s on the move that Paladins’ wide-open spaces come into play – dynamically shifting battlefronts where teams can flex their abilities in combo. Every champion can take a bit of a beating, but any concentration of fire and buffs will soon empty you of hitpoints. You’ll learn to disengage with a tap of the ‘F’ key, triggering a cloaking device, or a jetpack, or an upward leap – some means of retreating, better to regenerate that lost health and charge back in from another angle.

That back and forth defines the flow of the game. A good scrap between two Paladins champions can resemble two people trying to pass each other in a corridor, repeatedly coming face-to-face. Winning is all about knowing when to leave, so that you can bounce back without a long, post-respawn trek across the map.

Let’s talk about those cards. At the beginning of a match, you draw three from a deck of potential buffs and ability modifiers, and pick one. And you do it again every time you score a few good hits on the enemy and level up. Most often you’ll be bolting a healing effect onto a shield, or extending the length of a rapid fire ability – but the most entertaining cards reimagine Paladins’ fundamentals. One of assassin Skye’s upgrades lets her to cloak while on horseback, allowing her to canter behind enemy lines and plant bombs unseen. 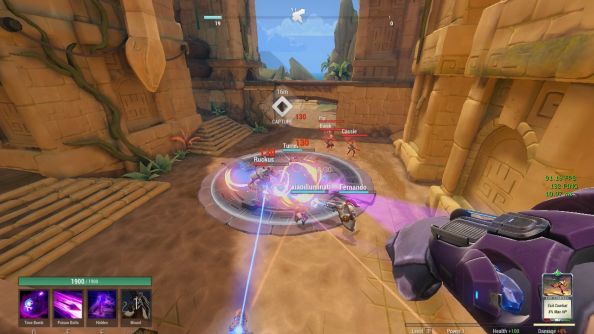 After the game, you’ll open chests (they spring open, actually, with a firework display reminiscent of Hearthstone’s compulsive packs) to unlock new cards, and craft still more using the duplicates in your collection. Presumably chests will also fund this free-to-play FPS once it’s finished.

At the moment, with no way of determining what cards will show up in your hand, they’re merely a fancy way of presenting a clever levelling system. But it’s clear there’s a deck-assembling metagame ready behind the scenes: a ‘Constructed’ mode, locked off in the beta, should arrive before Christmas. Once it does, it’s not too difficult to imagine the build guides spilling across the internet, advocating dramatically different variations on the same champion.

That’s surely the endgame: an audience absorbed by the hidden depths of the world’s first CCG-MOBA-FPS. Hi-Rez have enjoyed massive success with Smite, and might manage the same here, even with Overwatch in the wings. For now, cynically conceived thought it might have been, they’ve got a pretty nifty shooter in beta.