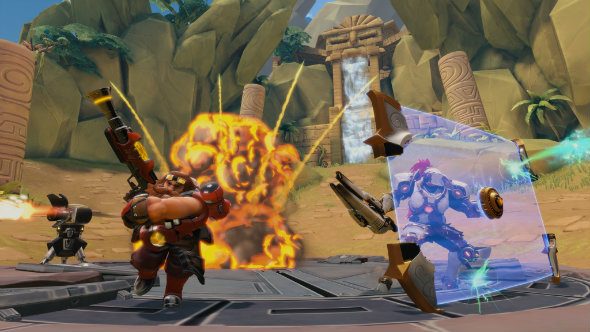 If you’ve seen the Paladins open beta trailer, you’ll be forgiven for raising an eyebrow at the similarities between the Hi-Rez hero shooter and Blizzard’s Overwatch. The two have some very similar characters: small dude with turrets and hammer, big dude with energy shield, mech – you get the point. This has led to people calling Paladins an Overwatch clone, so Hi-Rez co-founder, Todd Harris, has released a detailed post explaining why it isn’t.

Since you’re here, you might as well check out our list of the best FPS games on PC.

Basically, the reason Paladins isn’t an Overwatch clone is because Hi-Rez made a third-person hero shooter called Global Agenda, released in 2010, that already had a lot of the character archetypes in. There’s the woman sniper, an armoured knight with a hammer and shield, a male engineer with a turret and a hammer, a woman damage dealer with a jetpack and a rocket launcher, and there’s even someone who’s basically Mercy, halo and all. In fact, there are more examples in the Reddit post.

Hi-Rez explain in the post that they couldn’t clone Overwatch in a year, and that they were shocked when it was announced, but just kept going, trying to differentiate their game from Overwatch, as they didn’t want to compete directly with Blizzard.

“it would be almost impossible for a studio of our size to ‘clone’ Overwatch in a year,” Harris explains in the post, “but Overwatch did have some nice features that we decided to incorporate into Paladins (Kill Cam, Improved Lag comp, some verbiage like ‘eliminations’).”

Looking at the entire thread, Hi-Rez make a convincing argument, but I did have to laugh at the hook montage they added in towards the end. You can enjoy that below: