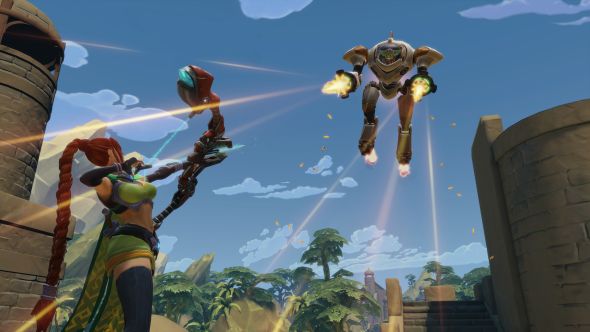 Update: Hi-Rez have addressed the negative reaction to the recent Paladins patch, which many saw as a move towards pay-to-win. In an upcoming update, Essence cost of Legendary cards is being brought down and earning from common cards is being bumped.

On top of these changes, people who bought cards at the old price will be refunded Essence by way of apology.

Shooting people, much like misery, loves company. Here are the best multiplayer games on PC.

“Players that purchased cards at the old price will be refunded essence to compensate. We are hoping to have this refund go out later today US Eastern time. In the coming updates, we will be evaluating Legendary card balance and making adjustments to bring them all in line.”

In addition, the amount of Essence a common card gives when it drops a duplicate in a Radiant Chest is being upped from 60 to 250. In the future, players also might be able to disenchant unwanted cards for Essence, and you can expect more tweaks to come until they find the right balance for Paladins.

Original: The latest patch to Hi-Rez Studios’s free-to-play hero shooter, Paladins, has been angrily derided as a decisive move towards a ‘pay-to-win’ game economy.

Here are the patch notes for open beta 44on the Paladins website. The change that’s causing all the fuss is the addition of ‘Essence’, which joins Gold and Crystals as the third in-game currency.

Before Essence, the Paladins model followed that of many free-to-play games: one currency (gold) was earned by playing the game, and another (crystals) was bought with real money. These currencies could be used to unlock champions, cosmetics or ‘cards’ for your loadout, which gave substantial in-game advantages. You could also use them to buy loot boxes (Radiant Chests), which could also drop cards. Players were mostly satisfied with this system; the rate of gold gain felt reasonable, enabling them to acquire good cards with a bit of grinding.

Essence has now replaced gold as the currency from which cards are crafted, and into which duplicate cards from Radiant Chests are converted. While a complication, this needn’t be fatal in itself. The problem, in essence (WINK), is in the numbers: card crafting costs far too much essence, and duplicate cards convert into far too little. This is exacerbated by the arrival of ultra-expensive Legendary cards for every champion, also added in this new patch.

As Ten Ton Hammer report, even if you had every card for every champion before the patch, you still need 36,000 essenceper champion(there are 21) to get all their Legendaries. That’s 756,000 in total, and you get a feeble 60 for a duplicate Common card. Imagine how much worse it is if you’re a new player, without any cards at all.

The end result is that gold is now essentially useless, and players are not so much nudged as kicked violently toward buying crystals, to buy chests, to get enough essence to complete their card collections. A post on the Overwatch forums sums it up neatly, while another on the Overwatch subreddit extends a tongue-in-cheek “welcome” to Paladins players.

Almost every thread on the front page of the Paladins subreddit is related to the new patch, and most of them are angry about it.