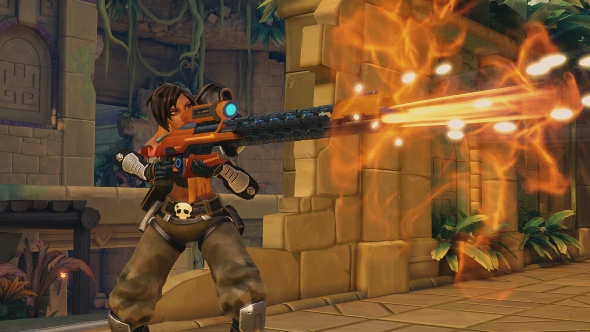 Update February 22, 2018: Paladins will get rid of its controversial Cards Unbound system, and split Battlegrounds into an entirely separate title.

Last year, hero shooter Paladins launched a new Cards Unbound system that worked out to be a whole lot like the controversial Star Card system from Battlefront II. As you might imagine, this decision proved quite unpopular, and the community quickly began to protest the new mechanics as ‘pay-to-win.’ But now, they’re gone.

Marvel at the many monetisation models in PC’s best free-to-play games.

The change was announced by Paladins’ new executive producer (known as HiRezChris) today. “We know this system has angered many of our most loyal fans and become a point of continuous contention in the Paladins community (and even inside of Hi-Rez). Your voice has been heard loud and clear. Our team will be working over the next major release cycle to remove Cards Unbound from the game.”

Design on the new system is still in progress, but the developers want to unify competitive and casual gameplay under a new, less grindy card system. Here’s what their preliminary plans include:

That’s all in the future, but effective tomorrow, the battle royale-inspired Battlegrounds mode will be cut from Paladins in an effort to to spin the mode out into a separate game. “Right now,” Chris says, “we are in a spot where the changes we need to make to each mode are in conflict with what the other mode needs. We think that having separate teams focus on separate games will produce a greater result.”

The new version of Battlegrounds will go underground for a bit, but the developers hope to start a public alpha within the coming weeks.

All this comes shortly after a new report published at IGN, which suggests some internal strife at Hi-Rez, with an anonymous source source inside the studio saying the Cards Unbound system was an unpopular mandate from executives in the company. “It’s just a pay-to-win system,” the source is quoted as saying. “The company is being forced to do something that people within the company don’t want to do.” It remains to be seen how the changes for Paladins will affect the game’s long-term future.

Original story December 1, 2017: The Paladins community are not happy about a recent update to the game’s card system, which in their view transforms its casual play mode into a pay-to-win game. As an added twist, the new system – named Cards Unbound – sounds an awful lot like the Star Wars: Battlefront II’s Star Cards. And yes, we’re sorry we have to bring that up yet again.

Before a match, Paladins players equip a deck of five cards to modify their character’s stats and abilities. Under the previous system, players would build up a collection of cards by crafting them or opening loot boxes (chests). In Cards Unbound, players have access to every card, but those cards now have levels with wide power differences, and will need to be ranked up (to compensate for the change, any cards a player already owns will be boosted to level three).

Ranking up is done by collecting duplicate cards, either through grinding the game or purchasing chests with real money. The crafting currency is also gone, so players can’t make their own duplicates and are entirely reliant on random drops. This is very similar to the Star Cards system in Battlefront II – indeed, developers Hi-Rez even allude to this in the blog post accompanying the change, saying “we get it: This is a major change that may be controversial, particularly given some recent questionable moves by full-price games.” 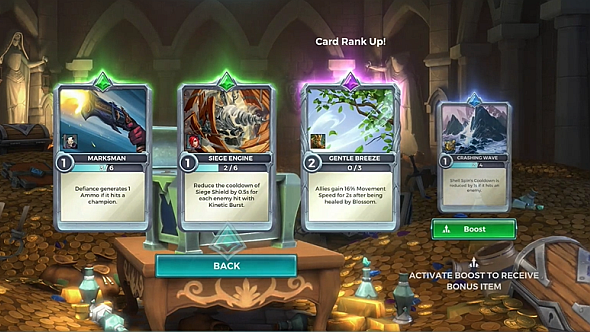 It’s important to point out that, in competitive mode, all cards are frozen at level three, to ensure a completely even playing field. The controversy comes in quickplay mode, where the new system quite clearly offers a power advantage for anyone willing to drop a lot of money on loot crates, thereby ranking up their cards.

Hi-Rez say the change comes from having listened to the community, some of whom want “the most balanced, hardcore game possible” without having to unlock cards, while others “just want to have fun and do cool things” in an “over-the-top” sandbox, “unconstrained by the more cumbersome aspects of deckbuilding.”

But the community seem unconvinced. The front page of the subreddit is dominated by threads bemoaning Cards Unbound and vowing to ditch the game. Here’s a comprehensive post, upvoted 669 times, that says it is “clearly pay-to-win” and lays out the key problems: not everyone wants to play competitive, which has skill-based matchmaking, but high-level cards are so strong that your choice in quickplay is either to pay or endure a horrible grind.Paladins YouTuber Kami saysyou need 43 dupes to take a common card from level one to five. There are 271 common cards in the game, so you can imagine how likely it is to get 43 dupes of a single one.

This isn’t the first time the Paladins community have called ‘pay-to-win’ after a patch. Back in February, Hi-Rez tuned rewards and pricesafter players complained that they felt nudged too aggressively towards paying real money for chests.