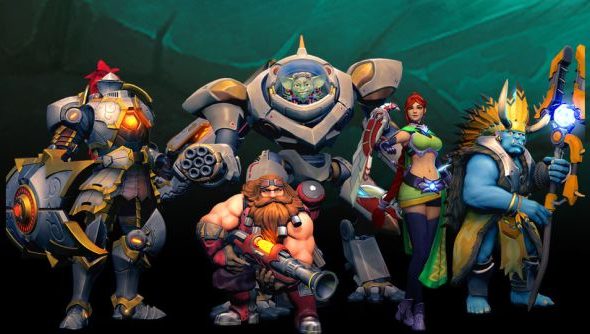 Hi-Rez studios, previously of Tribes: Ascend, currently of Smite fame, have announced the brand new game they’ll be showing off at Gamescom. It’s a 6v6 objective based FPS with a cartoon art style, a thick dose of humour and for some reason a trading card minigame – Paladins: Champions of the Realm. Well, Overwatch didn’t have an X of the Y subtitle, so I suppose someone had to. Introduction video and details below.

If you want to see more in-game footage, IGN have a healthy collection.

The two main drawing points for this over its rivals seem to be the wide open maps and the card system, neither of which I’m a big fan of. As you’ll see from any more than 20 seconds of the IGN footage, the maps seem very boring to play on. Wide open spaces with infinite-range weapons mean shooting at dots you can barely see and strafing from side to side. Perhaps that could be improved by dotting the landscape with more obstacles, but that’s very against their no-corridors policy.

As for the cards, I understand the want for a progression system that modifies each character and makes them feel your own. Titanfall, a game I love, had it to an extent. But distributing them randomly from a deck throughout the match? Not so sure. I don’t want to have my playstyle picked for me by a random number generator, I want to pick it based on what’s going on in a game. I will vary my playstyle if I want to, your system doesn’t have to do it for me. It’s just going to lead to feelbad moments when you don’t get the 50% of your deck you actually want.

Other than that it’s interesting, but I don’t see a reason to play it over TF2 or look forward to it over Overwatch – Blizzard fanboy I am, but OW looks far more interesting and technically sound to me. We’ll likely get some hands-on time at Gamescom and will return to tell you more. You can sign up for the beta and look at some character designs (including Hi-Rez brand extra classy jiggle physics) on the official site.