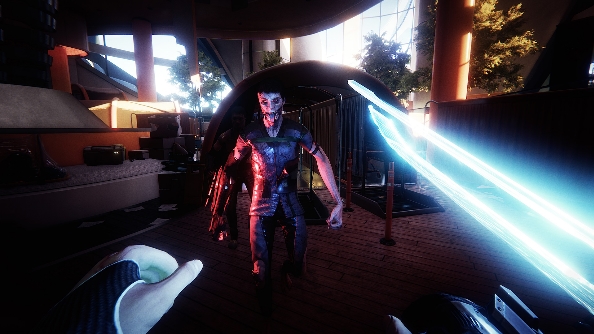 If P.A.M.E.L.A isn’t on your radar already, it’s about to become one strong permanent addition. It’s the work of a tiny six-man indie outfit, built in Unity, but it looks like the next triple-A game from Megacorp. A sci-fi survival horror, you can get a great look at its Looking Glass games-inspired world in this alpha footage.

With ambitions like these, P.A.M.E.L.A could be destined to be one of the best PC games ever.

The holographic interface and shiny surfaces scream Mass Effect, but the sense of place and atmosphere in the game’s world certainly harks back to the days of System and Bioshock. While previous footage kept much of the systems under wraps, this video demonstrates construction and combat.

There’s no release date for P.A.M.E.L.A as of yet, but the swift Greenlight campaign last year secured it a place on Steam, and developer NVYVE state it’ll be here this year.