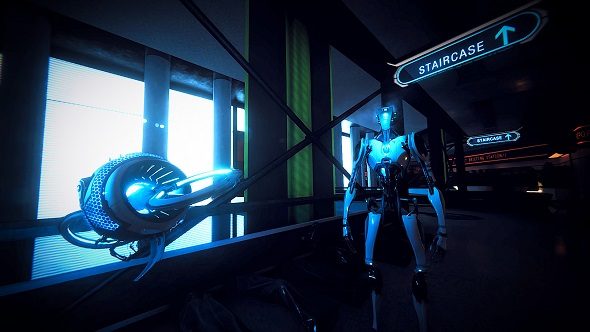 Whenever you hear of a sci-fi location named after Biblical visions of Paradise, you know stuff is going to go horribly wrong. Eden from open world survival horror P.A.M.E.L.A is no different, as players wake up in this doomed city, which is now overrun by mutated freaks called the Afflicted.

For more survival experiences, check out these other top PC survival games.

Guided by Pamela, the city’s lone AI overseer, the player must craft new weapons and equipment to defend themselves from the hordes of the Afflicted, while finding out what caused Eden to descend into Pandemonium. Survivors must scavenge for information about the city’s fall, grabbing upgrades to their special AARM device. This arm mounted gadget can be augmenting with new weapons and its special AARM UI system projects elements of the game’s UI onto the landscape for additional tactical information. If you know an Afflicted is waiting round the corner to chew your face off, the AARM will project its predicted location onto the wall so you can plan your route forward.

P.A.M.E.L.A’s free form base building system allows players to carve out their own outpost in the chaos of Eden, giving them a place to sort supplies, gather more information and eventually help power the city back on and restore some order.

However, this can awake the deadly Seeker droids, who will respond to your looting and murder of what were fellow citizens, by pumping you full of hot lead. There are friendly robots and even people hidden within Eden, but your home base will be your only real place of safety from the Afflicted and the Seekers. It is up to you to discover how an obsession with constant technology advancement and bio-modifications cause Eden to collapse in on itself, and if there is any way to help its citizens return to normalcy.

“P.A.M.E.L.A. represents a bold step for us. Having previously utilised Unity in our architectural practise, we’re excited to bring those skills into game design. I am very proud of our incredible team – it’s been a dream come true for everyone involved. A lot of sacrifices, sleepless nights, long days, sweat and tears went into making the game and we hope the gaming community enjoys it”, said Marvin Maalouf, President and CEO of NVYVE Studios. “We see P.A.M.E.L.A. as the first in what will hopefully be a long line of quality titles to come out of the studio and want to show the world that a small team with a huge amount of passion can create beautiful, immersive and fun worlds for players to explore.

If you are up for a trip to Eden, P.A.M.E.L.A is set to launch on Steam Early Access on March 9, with the game hoping to launch fully in late 2017/early 2018. P.A.M.E.L.A will be launching at a reduced price when in Early Access so if you’re really in the mood for some open world survival horror, get in that cryopod and head off to this floating nightmare.