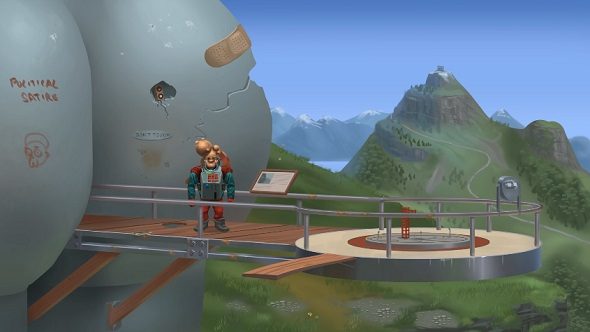 Funded on Kickstarter all the way back in October 2014, the utterly surreal adventure game Paradigm is finally launching on Steam April 5. Starring a failed genetic experiment who just wants to become the world’s best electronic musician, this bonkers point and click adventure has players meeting such colourful characters as a beatboxing eggplant, a psychopathic superhero and an evil sloth that vomits chocolate bars. It’s no King’s Quest, that’s for sure.

If you’re in the market of indies, you must read our list of the PC’s best indie games.

Casting players as the eponymous Paradigm, your goal is to escape the clutches of the evil corporation that is trying to kidnap you and take over the world. While that sounds like a standard adventure game plot, it soon devolves into you trying to set up a date between a local drug dealer and a toaster, or becoming the leader of a glam metal cult. Surreal humour is Paradigm’s bread and butter so if you’re a fan of shows like Rick and Morty, it should be right up your alley.

According to the game’s designer Jacob Janerka, Paradigm’s art style is “Pixar meets Fallout”, with colourful characters melding with post-apocalyptic visuals. The whole game is set in the irritated remains of Eastern Europe, with the future looking like how it was envisioned back in the late ‘70s/ early ‘80s.This means massive CRT monitors everywhere, space age furniture and music still being played on tape. It also rapidly switches between presentation style, going from hand painted visuals, to pixel art, to anime-esque scenes at the drop of a hat. Conventional is certainly not the word to describe Paradigm.

If you’re yearning for a surreal point and click adventure or are simply one of the many backers who has been waiting nearly three years for Paradigm to release, you won’t have to wait much longer. Paradigm is set to release for PC and Mac on April 5, with a Linux version coming soon after.