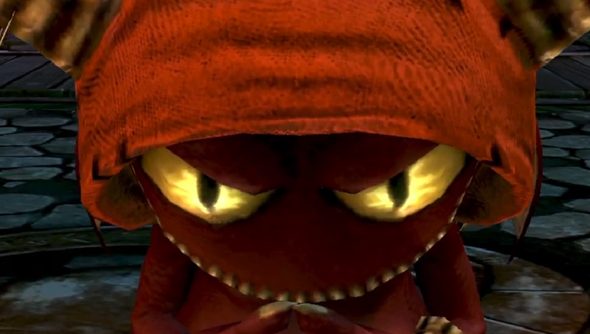 After so many studios have botched so many remakes, it seems like Paradox is determined to pick up the slack, even if they can’t pick up the trademarked names. You’ve got The Cartel, taking the tenets of Syndicate and turning them into a Mafia simulator, and now you’ve got Impire, their take on Dungeon Keeper. It’s being developed by Cyanide, of Blood Bowl and that recent Game of Thrones RPG (and that RTS) fame, and while there are scant few details so far, there is a trailer.

And while it can’t rely on the Dungeon Keeper license, they are cashing in on a little fan loyalty by setting it in the same universe as Majesty, the curiously successful city-management RTS. You’re a great big demon trapped in a little demon’s body, and the aim of the game is to become a great big demon again, by… building dungeons. Maybe that’s just a means to an end. Who knows. Either way, you’ll have all the hallmarks of Dungeon Keeper like invading heroes, monsters and demons to level up and manage, spells and dungeon building.
One nice little extra is that it’s going to come with coop and multiplayer modes, which should be interesting. Competing dungeons? One player is the hero, one the dungeon keeper? Who knows. Well, Cyanide know, they’re developing the game. But we don’t know. We’re being kept in the dark, where the walls are dank and the chains rattle. Yes, like in a dungeon. Well done you.
Here’s the announcement trailer.