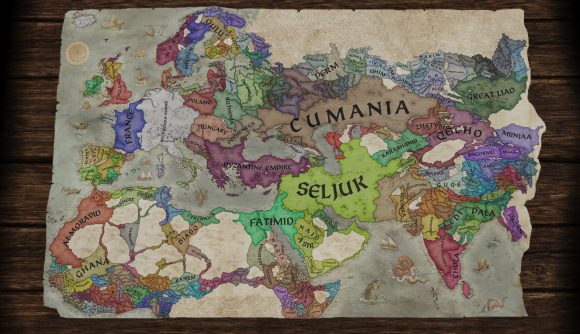 As Paradox Interactive’s current CEO – Ebba Ljungerud – steps down and old CEO Fredrick Wester retakes the reins, strategy fans are reminiscing about the company’s history. User toco_tronic on the ParadoxPlaza subreddit has created a poster that maps out all of the grand strategy games the company is known for.

Starting with the original Europa Universalis back in 2000, and ending with Victoria 3 – release date to be confirmed – this poster includes a whopping 91 entries, covering major releases, accompanying expansions, and DLC. The poster only focuses on games made by Paradox Interactive’s internal grand strategy team. This group has always been known informally as Paradox Development Studios, but it wasn’t spun out as an official, separate studio until 2012.

There are a couple of exceptions and edge cases, for example the early grand strategy games were published under the name Paradox Entertainment, and missing are some early projects from before Paradox became its own independant company. Not every piece of EU4 DLC or CKII add-on has been counted either, but the core of the studios’ release history is represented. Spin-off projects such as Darkest Hour: A Hearts of Iron game, also weren’t made directly by Paradox and have been excluded.

Toco_tronic has made the poster available for download in PDF form, as well as desktop wallpapers up to 3840 x 2160 in size. The thread even features an image of the poster printed out and mounted in a frame.