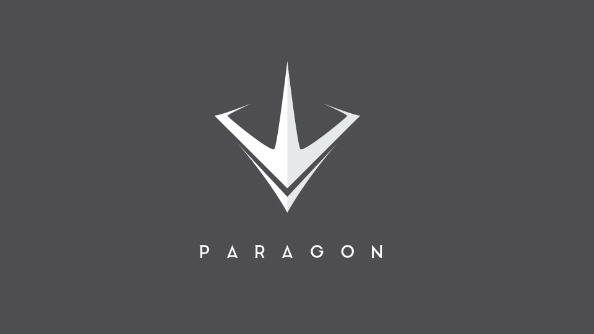 Epic Games, creators of Gears of War, Unreal, et al, have announced their new game, and it’s called Paragon. What’s it about? Beats me. So far the only information on the game exists via a teaser trailer that consists of swooping shots over a man with a gun called Twinblast, and a perplexing teaser site in which you’re able to unlock in-game items for a game no-one knows anything about.

Will Paragon become one of the best shooters on PC? Wait, will it even be a shooter?

The game’s coming to PC in early 2016, and appears at this point to be exclusive to our beloved platform. That’s… that’s about it, folks.

What’s that? You want me to start idly speculating? Well, you should have said. The terminology used over on the game’s teaser site points a large, conspicuous fingers at MOBA territory – “discover a new hero each week,” reads the text over five obscured images of said heroes, “and unlock in-game items.”

The other heroes joining Twinblast who have thus far teased on the site are Steel, Sparrow, Dekker, and Grux. They’ll be revealed in that order, one per week, until 3 December. Both the names and snippets of imagery are very Epic Games, and personally I find that quite endearing. Expect some of the biggest shoulder pads and boots ever seen in games, and don’t be at all surprised if Grux winds up smoking a cigar or chewing tobacco.

What do we know about Twinblast, the ‘revealed’ character? Well, he invites you to “go in, both guns blazing.” He’ll dual-wield his weapons, then. More enigmatic is the option to fight for glory, pride, fortune or infamy. Picking one of these right now on the site unlocks a range of buffs or crit modifiers, again strongly suggesting that we’re talking about a MOBA here, which you’ll gain for Twinblast when you sign up for the beta.

Fighting for glory, for example, unlocks the Reverberate ability which grants a damage bonus vs shielded targets, whereas opting for infamy unlocks Merciless, which allows a critical strike bonus vs bleeding targets.

This combination of very MOBA-like language, the fact that there are five heroes, and the deeply traditional Epic character design which harks back to Unreal Tournament tells me that this is Epic’s Battleborn, a MOBA/shooter crossbreed. That’d also be the kind of game you’d want to start beta testing early in the dev cycle of, wouldn’t it?

No word yet when that beta begins, but we’ll keep you updated when Epic reveal more. And let’s face it, there’s quite a lot more to reveal.