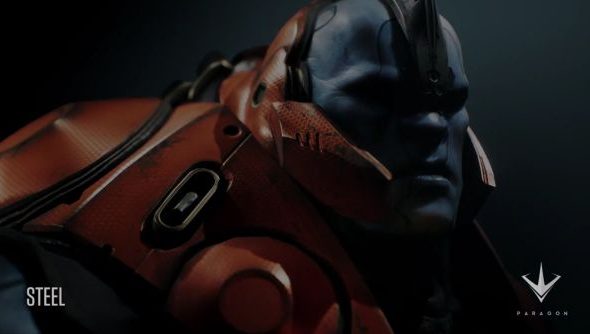 Phil wrote about Paragon last week, Epic Games’ new … game … that might be a shooter? We don’t know. We don’t know anything. It’s probably an FPS because Epic are making it and so far there are two men in it. It has items and stuff, maybe some abilities and stats and things that they’re already asking us to decide between in a weird pre-vote scheme that’s more meant to build social presence than offer anything. Anyway, here’s their latest character trailer, Steel, with his big red armour.

For all we know, Paragon could fit on our best MMOs list.

You can see his character page on the official site. Apparently he’s all about trying to “LEVEL THE FIELD. OR LEVEL THEM ALL.” which sounds dramatic but easily could be talking about local buildings. Maybe he’s an architect. All these power-ups are made to help him do that.

That’s it, I’ve cracked it, Paragon’s a simulator. Co-operative skyscraper construction. Gotta buff up your team-mates to make them better at carrying girders and so on. Shields are used to protect against falling debris. Cooldown reduction makes ordered supplies arrive sooner, while you need anti-crowd-control for when people need to crawl out from under a tipped skip or something.

Anyway, if somehow I’ve guessed all this wrongly, we’ll probably find out after the other pair of characters are revealed, presumably followed by an actual trailer. In reality, it’s probably similar to Overwatch / Battleborn / That CliffyB One, since they’re all the rage.