Paragon, Epic’s third-person MOBA with a thirst for heights, is upheaving almost everything about the game in its Monolith update due out tomorrow. On top of a new map, 30% smaller than the Legacy battleground, every aspect of the 5v5 multiplayer is being reworked down to the calculations it runs on.

For other free PC games to sink your teeth and not your wallet into, check these out.

MOBAs are no stranger to change, in fact it’s the one genre where reinventing your game every few months is a hotly anticipated event among players rather than a sign of design gone wrong.

But in Paragon’s case, there’s heavy doses of both. To find out more about why Monolith was needed to create the game they want and stop the game they didn’t, we talked to Epic’s lead hero designer Cameron Winston about renovating Agora.

“The impetus for Monolith came when we had Legacy of Agora and it was very much a map created for necessity,” Winston tells us after a few matches on the new map. “But as we put the map out there we noticed we were having problems. The matches were long and they didn’t resolve, a lot of times we were having problems with players knowing what to do on the map because the map itself had no affordance to tell players this lane is different from that lane, or if this means anything.”

The old map’s size spawned all sorts of problems without solving many others. It was huge, and getting a minion wave from one end to the other in the later stages of the game, attempting to capitalise on the death timers of the other team, could end up taking so long that they would respawn just as you arrived at their base. Even without escorting creeps down a lane, getting around took forever, which is why the team added Travel Mode – a way to sprint about when out of combat with the danger of being rooted if you are hit while running. But even that beget its own issues.

“[Travel mode] allowed players who knew how to use it to do some really exploity things as far as how they would engage and fight each other,” Winston says. “The reason we had travel mode originally was because the map was so big that it felt kind of garbage to run around it at a normal speed. So we made everyone fast so they could get around the map but then that lead to the kind of degenerate gameplay that we’re talking about.”

This ‘degenerate gameplay’ involved players teaming up to leap-frog an opponent, with one in travel mode constantly able to catch up to and deal damage to an enemy being kept out of travel mode by a partner. It repurposed the mechanic from a traversal tool to a fighting mechanic and, well, felt terrible. 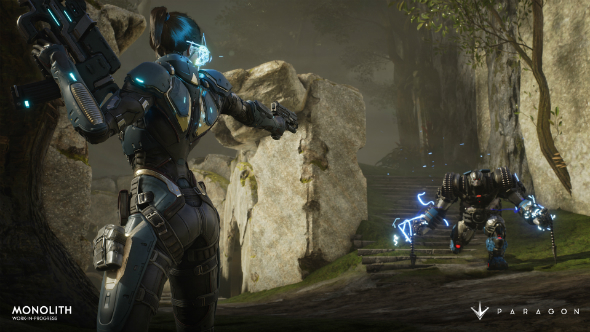 Among the internal ‘competitive QA team’ at Epic, metas evolved which positioned Grux, a tough melee fighter, as a support for the mid lane. Grux would stand there, just to the side of the lane, in full view but in travel mode and wait for the enemy mid to go in for a last hit. As soon as they fired their attack, they were unable to prevent him from jumping them at which point the enemy mid either uses their teleport to escape and foregoes last hits, or they die.

“You could literally keep people paralysed in fear with the threat of this travel mode engage distance which was way way farther than we ever intended,” Winston says. “Stuff like that was really bad for the game and it needed to be taken out, so a lot of the map decisions were based around making a more consistent game experience with one speed that everyone plays at.”

The last we spoke to the Paragon team, they were already attempting to fix travel mode. Having been alerted to its dangers by the competitive QA team last year in November, the public were just beginning to notice the same exploitations in April prompting the team to talk about what solutions they were proposing. None of them have survived to implementation because they were all posing fixes in the context of the old map.

“My original approach to try to fix these problems was proposing a teleport solution to help people get around the map,” Winston says. “I knew that making everyone run at full 890 TM speeds would probably break the game we had at that time so we didn’t want people just running around in TM all the time but we also wanted to fix the problems we had. So we tried teleporting and it just didn’t work out, we found that a lot of time what happened with players was they would force a rotation from the other team and then they would all teleport to the other lane and push that and because there was no fast travel by the time the other team go to the other side their towers would be gone.” 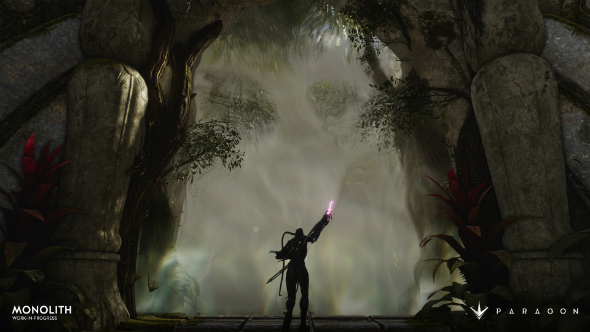 Other proposed solutions that now find their root completely absent in Monolith include a way of allowing jungle Shadow Pads (now completely removed from the game and replaced by Dark Souls-esque doorways of fog) to give players moving between lanes a speed boost, creating a specific path to follow through the winding glades for efficient travel. But, of course, there are reasons you can’t have nice things.

“People would fight around the pads and use the speed boost as a kiting mechanism, so it was all the same problems,” Winston says, somewhat exasperated. “Essentially the best laid plans of mice and men… You want people to use this as a traversal tool but they use it as a combat tool. And that’s why we have this competitive team in our building because they just abuse every mechanic that we put to them and if there’s any room for someone to exploit it then they do and we see exactly what players will end up doing.”

While this team of 12 to 13 extremely skilled players hammering the game for ten hours a day is enough to rapidly seek out the ruts evolving metas eventually sink into, they’re not best placed to advise on the early user experience, something Winston recognises is also at fault with Paragon.

“We’re not fully happy with the card system,” he says, definitively. “There’s work to be done. The auto-buy feature, the dream of the system is that if you’re a player that doesn’t understand cards or what Paragon is, you hit the button to play, you don’t read anything and you just want to play the game. We want that player to not just instantly die. And what happens is if you ignore the card system as it is right now, you will instantly die.”

Auto-buy, introduced in this update, takes the reigns of quite a complex part of the game away from the player but still lets them know it’s holding them. Leaving base you’re told what your earned card points have been spent on, and if you open the shop it’ll tell you what to expect from your next deposit when you return for healing or death.

“It’s designed to get you through those first few games, until you get to a point where you realise ‘these things are doing something for me’,” he says. “Hopefully, the dream is that the player then learns that they should be buying cards and they graduate from the auto-buy system and start maybe using their own decks and their own cards.” 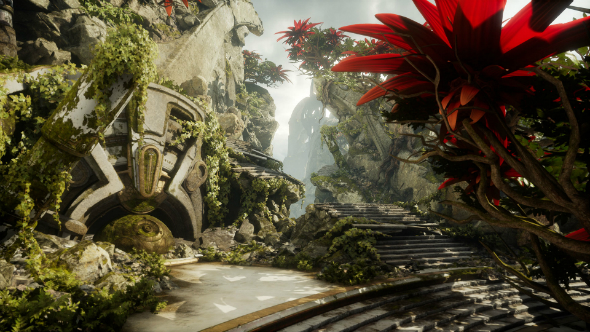 All of Monolith’s changes are designed to put you in the action, avoiding falling down the long warren-like rabbit holes of worrying about builds too much, though they offer an edge at higher skill play. This extends deep into the game’s own code, with the calculations used by the game getting their own overhaul leading to new avenues for hero reworks.

“It allows us to be a little bit more dramatic,” Winston said. “We have a lot more room for hero individuality with this new math that we’re using, and that’s probably the biggest change that we made, how damage, armour, and health are calculated. All that stuff together allows us to push hero identities a lot harder than we used to do, so a lot of the reworks actually came down to that sort of nitty-gritty detail.”

Every hero in the game has been rebalanced for new movement speeds, such as Steel’s huge teamfight ultimate “Shield Slam” where he would dive onto an enemy and stun them. “We adjusted them based on the whole game getting faster as far as lethality and cooldown times go, so a lot of heroes lost their identity a bit,” Winston says. “Steel for example, his ultimate being the original way it was didn’t make much sense with the new speed because you couldn’t hit anyone with it. It was impossible, they’d have to be already stunned by something else before Steel could even hit it, so he wasn’t fulfilling his role as initiator. His ultimate becoming faster was a natural progression of what we expected to happen to him because of our other changes.” 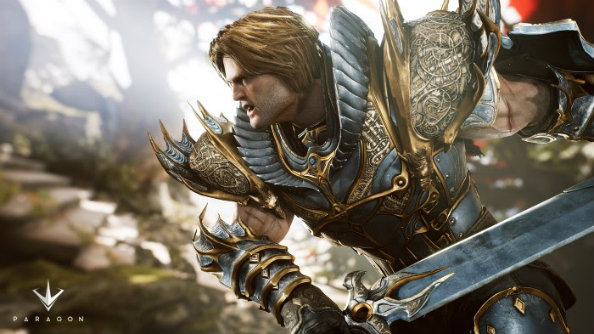 However a select few heroes have also their kits rethought, including Greystone, Sevarog and Twinblast.

“Twinblast has been aching for a rework forever, his original kit design was not something that was we could either have it be balanced or fun, but when it was fun it wasn’t balanced and when it’s balanced he isn’t fun,” Winston said. “He had too many toys; an engage, a disengage and a slow, so he could kite you on both ends of an engagement and philosophically you don’t want a carry that can both slow you and disengage from you. Those two things together are very powerful and make the character a little bit too good.

“We wanted to inject him with a lot more energy and make it feel a lot more fun to shoot, especially if people are a fan of shooting games, we wanted them to enjoy shooting with this character.”

This desire to cater Paragon outside of the MOBA set is one that has bitten them before. The Legacy map and mechanics eventually fell prey to exploits discovered by those from other MOBA backgrounds while Epic attempted to leave it open for those unfamiliar with lane roles and rotations. Monolith is a step closer along the sliding scale of team shooter to MOBA, but perhaps onto firmer ground.

“What happened was we had a game where it was dangerous to do things, players didn’t know how to lane it, they didn’t really know what to do on it and it made games sort of stall out and get stagnant,” Winston says. “We wanted to make a new experience for players that emphasised more of the MOBA aspects of the game while keeping the action feel.”