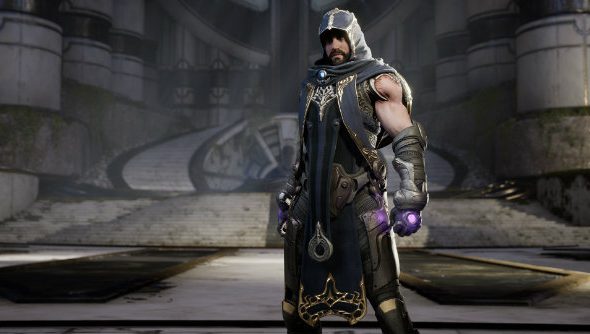 Update 14 March, 2016: Epic have put Paragon’s Founder’s Packs up for sale, allowing players to spend money on a bunch of cosmetic items and entry into the game’s Early Access period, which starts in four days on March 18.

If you can’t wait for Paragon to go free, the Founder’s Pack will let you take part in the Early Access phase, which will introduce new heroes every three weeks, community events as well as daily and weekly rewards, letting you get ahead of the competition. If you’re interested, head to Paragon’s official site and grab yourself a Founder’s Pack.

A new gameplay trailer has been released to celebrate:

Have you played every game in our list of the best free games on PC?

If you decide to grab one of the $19.99 Founder’s Packs, you’ll get access to the game when Early Access begins, skins, boosts, and other cosmetic items, which will also be unlockable by playing when the game launches.

There are also Challenger Packs ($59.99) and Master Packs ($99.99), if you’re stinking rich and don’t mind spending a load of money on aesthetic items. These will give you “a huge number of skins, unlockable items, boosts, a unique skin, and a Founder’s Pack to give to a friend.”

Unless you feel compelled to support the developer, quite why you would want to buy these is anyone’s guess, since apparently the game is designed so you don’t ever have to spend a penny. All Heroes will be free, and cards can only be earned by playing the game.

Buying these packs will get you in Paragon’s Early Access, though, so you have the option of paying to play an unfinished game or waiting and playing it for free. I know which option I’d choose.

There will be a beta available in summer 2016 anyway, and you can sign up to that for free on the official site. At least you’ll be able to try it out before gambling on a Founder’s Pack this way.

“Paragon is designed so that all players can compete and win without ever having to spend money,” explains creative director Steve Superville. “All Heroes are free, and cards can only be earned by playing the game.

“The game will never be pay-to-win, meaning we will never sell gameplay-affecting items. We will sell cosmetic items (skins, emotes), boosts and other convenience items, along with Paid Early Access. We’re taking this approach because we believe that competitive games need to be fair for all players.”