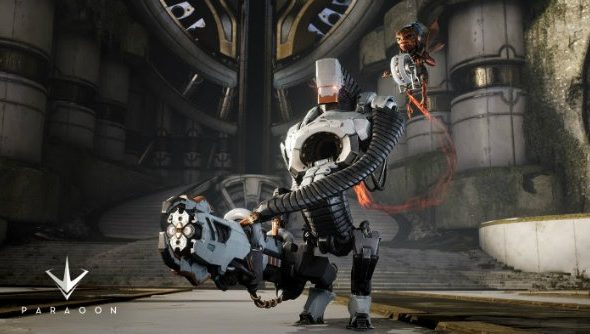 Update 11 May, 2016: GRIM.exe is now available to play in the Paragon beta, and here’s a glimpse of his abilities.

Epic have released an overview video to shine a light on the robot and imp duo and their combined abilities. GRIM.exe is a ranger who rewards precision play. When attacking as the hero you can keep up sustained fire on an enemy, barrage them over cover, absorb incoming spells with a bubble shield and more.

You can also control the enemy by altering their position with displacement blast or by slowing their movements with suppression. Check him out in the overview video below:

Original Story 5 May, 2016: A puny new hero has joined Paragon’s ranks, but fortunately he’s brought along a friendly, stomping murderbot.

The puny dude joining Epic’s MOBA is an imp named GRIM.exe who controls a combat droid, barraging his enemies with ranged attacks.

Pepper enemies with his pulse cannon, slow and knock them back with his shield, or fire off his ultimate, the Gyro Targeted Force Orb, which hones in on a target, damaging enemy mobs and passing through any object in its path.

All Heroes in Paragon are free and those in paid Early Access can start using GRIM.exe on Tuesday, May 10.

For those who are interested, the second open beta kicks off today and will run until Sunday, May 8.