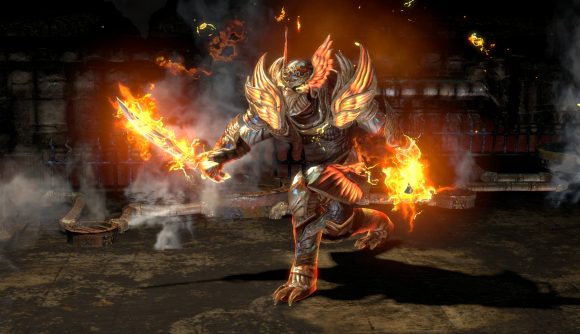 Following Path of Exile’s huge 3.7.0 – or Legion – update it looks like developer Grinding Gear Games has already got its sights set on the next expansion for the free-to-play RPG. In an update on the game’s website, the studio has posted some news about what it’s working on – and a 3.8.0 update is coming.

In the post, the studio says it’s planning to announce the new Path of Exile expansion around August 20. It indicates that the broad scope of this release is a new challenge league (whose name is not on the list, but should be)” plus “various improvements to older master content (things like making Sulphite and Betrayal state shared between all your characters in the league)”

The update will also add “some systems changes we’re not yet ready to hint at (which should improve some areas that the community have given us vocal feedback on (not trade)) and all the usual new items, archetypes, gems and so on that you expect from a Path of Exile expansion.”

Though more details should come out when the studio officially announces the the expansion in August, it looks like players can expect to see a good balance of tweaks, improvements, and exciting new content for the game. From this brief breakdown, it doesn’t look like 3.8.0 will be as mammoth an update as Legion was, which introduced a new challenge league, a melee combat overhaul, and more.

However, it should add some neat things to get your teeth into before the anticipated 4.0 mega expansion arrives – which Grinding Gears’ studio director Chris Wilson has said “is going to take on Diablo 4, as far as we’re concerned.” We should more about this at ExileCon in November.

The 3.8.0 update has a tentative release date of September 6, but the studio says “Keep in mind all these dates may change as we get closer to release but things are looking good so far.” This makes sense, given that Wilson has previously said he wouldn’t run his studio with crunch, meaning “some game improvements will take a while to be made.”

Grinding Gears says it expects the Legion league to end September 2 on PC.