Grinding Gear Games has revealed its fourth Path of Exile expansion of 2018, and it’s their biggest update to the game ever, Betrayal. Not only are PoE players getting a new Challenge League, GGG is also introducing sweeping changes to some of the game’s oldest and most out of date pieces of content, such as the Forsaken Masters. As ever, you can also expect heaps of small tweaks and additions, such as new skills, player archetypes, unique items, quests, changes to crafting, and new maps to help spruce up endgame content.

The new Betrayal Challenge League focuses on a new faction called the Immortal Syndicate, a mysterious organisation who have discovered a way to bring people back from the dead without them being mindless zombies. However, to do this, they have stolen an artifact from a new character, Jun Ortoi, and his Order of the Djinn – naturally, it’s your job to team up with Jun Ortoi, infiltrate the Immortal Syndicate, and retrieving the artifact.

While Delve added infinite dungeons as the core mechanic for its Challenge League, Betrayal plays out like a cartel investigation, with players attempting to learn more about the various leaders of the Immortal Syndicate in order to take them down or interrogate them. There are four branches of the Immortal Syndicate to investigate: Fortification, Transportation, Research, and Intervention. You’ll start out your investigation with the identities of all the leaders unknown and work towards learning about each one, their underlings, and their safehouses. Ultimately, your goal is to unmask the mastermind of the cult and defeat them. There will even be some mechanics that are reminiscent of Middle-earth: Shadow of Mordor’s Nemesis system.

We spoke with Grinding Gear Games about the Betrayal expansion to learn more about everything it’s adding to PoE.

The most important detail of the lot: when can you play Path of Exile Betrayal? The release date is set for December 7, 2018 on PC and sometime in mid-December on consoles. 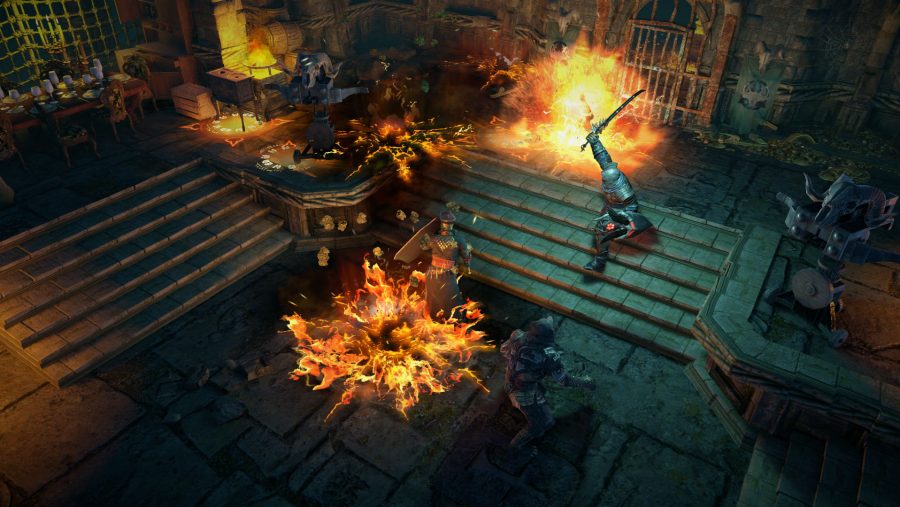 So how will this syndicate investigation play out in an action-RPG like Path of Exile? In every game world area you can encounter Syndicate activity from any of the four branches. For example, if you come across the Fortification branch you’ll stumble upon a fort that’s being occupied by the Syndicate and will have to battle against turrets, towers, walls, and undead spawners before confronting and subduing a Syndicate member or two. At this point you’ll have a few options, which vary based on a variety of factors. You’ll always have two options, which include interrogate, bargain, execute, and betray. Here’s a breakdown of each one:

Choose this option and you’ll imprison the Syndicate member in the order of the Djinn, adding some intel points towards the location of the safehouse of the Syndicate branch you encountered. These intel pints will tick up over time, making this a very reliable means of uncovering more information. Once you max out your intel on a safehouse you can raid it and gain access to even more Syndicate members. 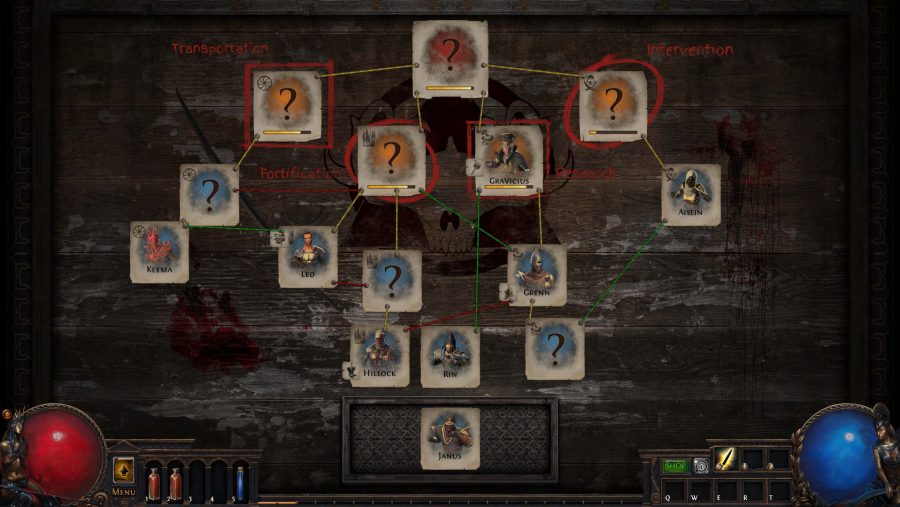 Bargaining options are numerous and each one will have a very different effect on the layout of the Syndicate – it’s a bit of a chaotic option to pick, but can lead to very lucrative rewards, such as altering Syndicate member relationships and which members are imprisoned. You will never get the Bargain option if there are multiple Syndicate members present – nobody likes a rat.

This is an option to go for if you can’t bargain and don’t want to interrogate. Executing leads would normally be very bad practice for an investigator, but as the Syndicate can bring their members back to life it’s actually very valuable. As the member you executed didn’t spill any information, bargain, or betray the faction their loyalty is rewarded with a promotion, meaning you now have lots of information about a high profile member of the organisation rather than an underling. This also means you’ll have a tougher, more rewarding fight later on.

This option only becomes available under specific circumstances: you need multiple Syndicate members present and they all have to have a relationship tie to one another. With these criteria in place one member may offer to betray the other, which will see them assume their role and rank in the organisation. Betrayals aren’t forgotten in a hurry.

So, what’s the endgame here? Each member is associated with a bespoke item and each branch of the Syndicate impacts what those items are. The Research branch, for example, will spawn experimental items with wildly varying properties attached to them. Savvy players will be able to game the Syndicate so that they get access to the best possible loot at the end of it all. By promoting and eliminating the right members, you can structure the Immortal Syndicate in a way that suits you and your character build. 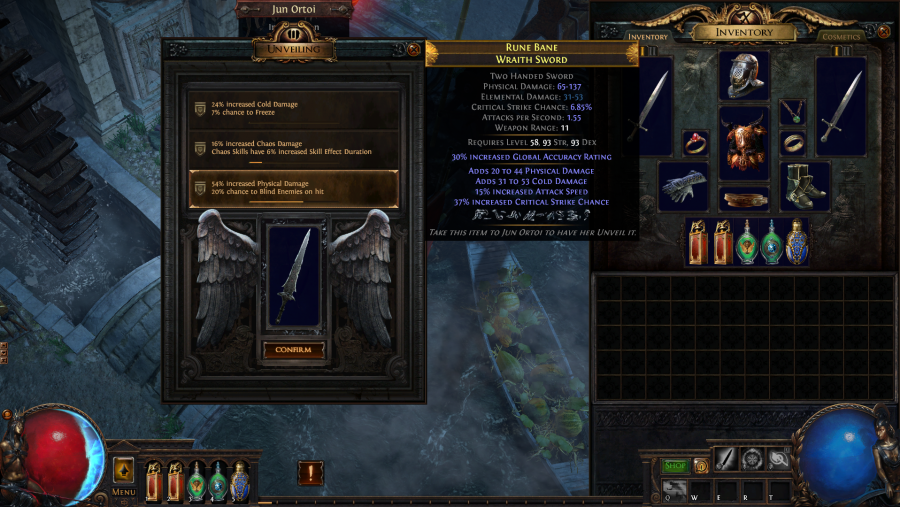 Enemies in Betrayal will drop items with veiled mods, which you can take to Jun Ortoi, who will help you unveil them and reveal what modifiers they can take. There are three new types of modifiers that can be placed on an item and you select one to lock in place each time you unveil. Better still, you can learn these mods by unveiling them, which means you can craft them for other items by using the workbench at your hideout. Particular mods can be unveiled multiple times, with each instance leveling it up and increasing its powers when you next encounter it.

You won’t need to repeat Master missions over and over again to lean Master crafting recipes. Instead, Betrayal issues these recipes as rewards for completing specific challenges during within a Master mission, such as unveiling a specific mod in Betrayal. 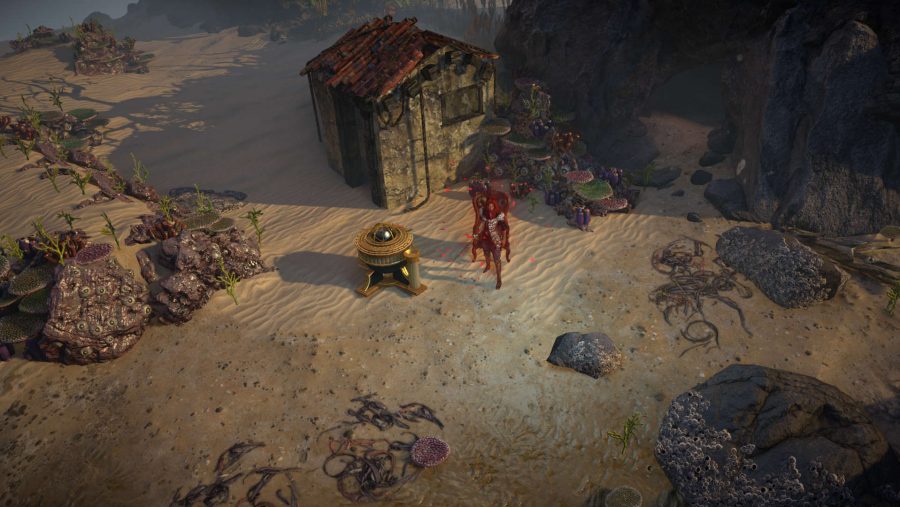 Player hideouts have received an overhaul in Betrayal. Now, players will have one unified hideout that spans all leagues, so you won’t have to grind away to craft a new hideout for each league. You can save and load up hideout templates for a quick setup, too.

Arguably the biggest change coming to Path of Exile with Betrayal is to the Forsaken Masters, who are being replaced in favour of four characters from 2018’s various leagues. Four of the old master have mysteriously vanished, and in their place you’ll find Einhar, Alva, Niko, Jun Ortoi, and Zana, who remains from the old Forsaken Masters. This freshens up the grind a little and ensures the mechanics of this year’s leagues, most of which have been very popular, remain integral to the game.

There have been some minor tweaks to improve each master’s gameplay loop. For example, Einhar from Bestiary will no accompany you on hunts and act as the net thrower, meaning you no longer have to worry about timing the throw just right and concentrate and clearing mobs instead. 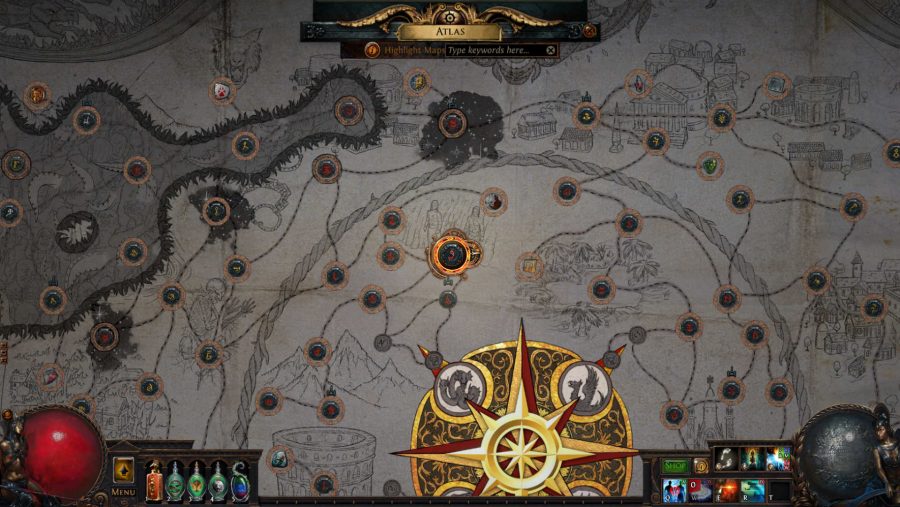 Master daily missions can now be found via the endgame map system, the Atlas of Worlds. Players will now see an icon on the map showing an active objective and can head there to meet a Master and receive a mission, which is being done to encourage players to visit maps they normally wouldn’t pick. Atlas Objectives will appear daily, but also periodically based on your play time.

Endgame tilesets are probably getting a little dreary for the dedicated Path of Exile players who pour multiple hours in every single day. Betrayal will spruce the endgame map pool up substantially with four new randomised maps, all of which are expanded versions of fan-favourite tilesets introduced in Delve.

This won’t come as a surprise to any PoE players, but a new expansion of course means new unique items to acquire. 15 new items will be available to earn in Betrayal, many of them exclusive to the Betrayal League itself.

GGG have provided details on of these items so far: Bitterbind Point. This is a shield designed for a summoner or spellcaster playstyle that rewards you for landing crits with spells by both your power and the power of your spectres. Bitterbind Point also has a veiled mod, so you’ll be able to expand on its potential even further. 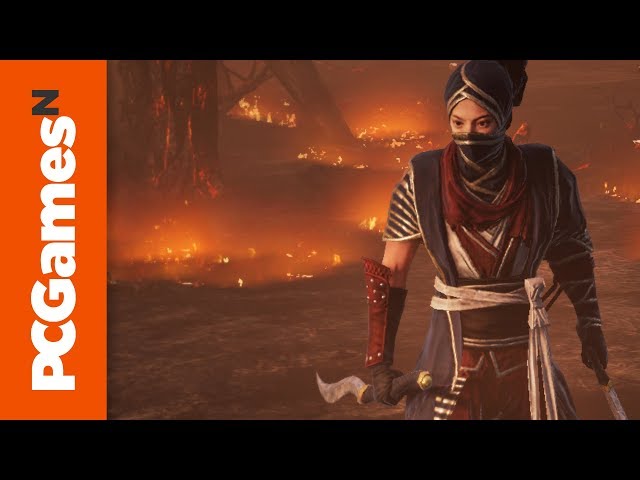 Finally, you can expect a total of ten skills to be either introduced or revamped in Betrayal. So far we only have details on two of them.

This channeling spell spawns and powers up an orb that moves alongside you. This orb will periodically fire projectiles at nearby enemies that explode on impact, increasing the rate of fire the more powered up the orb is. You can buff this skill with the Additional Projectiles support gem so that extra projectiles are fired in a line, providing this with an unusual but handy damage pattern. Alternatively, you can use the Duration support gem so the orb remains active for longer after you’ve stopped channeling. Finally, you can use the Area support gem so each projectile damages with some AoE and overlaps.

A brand is a new type of spell that summons arcane runes on the ground a bit like a trap. Runes will bind to nearby enemies and will activate repeatedly with their effect until the rune expires or the enemy dies. If the latter, the rune will return to the ground and await a new target. Storm Brand in particular zaps three nearby enemies at once and can be supported with Chain, Increased Aura, and Concentrated Effect support gems. You can also support Storm Brand with Life Leech so each zap returns life to you, which isn’t possible with other trap-like skills.

That’s your lot: everything we know about Path of Exile: Betrayal. GGG also announced that the action-RPG is coming to PS4, so the player base is set to grow even more over the coming months.