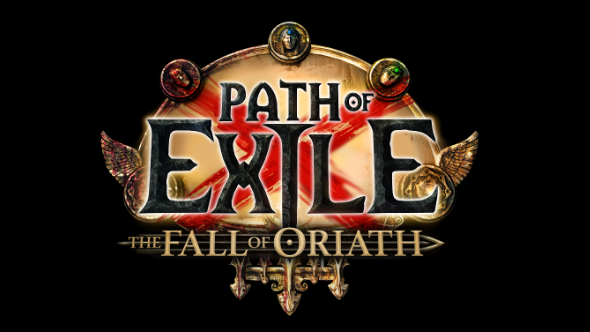 Three years on and Path of Exile is still going from strength to strength. It added two expansions in 2016 alone, had one million active players in December and saw a 44% increase in total playtime relative to 2015. For a free-to-play game, that last stat is vital. But 2017 is a new year, and what better way to see in the new year than with the release of not just one new act, but effectively six when the Fall of Oriath expansion lands later this year. The other five are essentially reimaginings of the first five acts, but with new NPCs, quests and some layout tweaks. The new Legacy League will also be arriving on March 3 to occupy your busy, blood-soaked hands until you get to take your exile home to Oriath.

For more gear-hoarding and ability-unlocking, check out the best RPGs on PC.

That means masses of new bosses, reworkings of familiar areas, new skill trees and lore to pick through as we gear up for The Fall of Oriath’s release. So to whet your appetite for all that Path of Exile goodness, here’s a roundup of everything that’s coming to the game over the coming months.

Path of Exile Act 5 – The Fall of Oriath 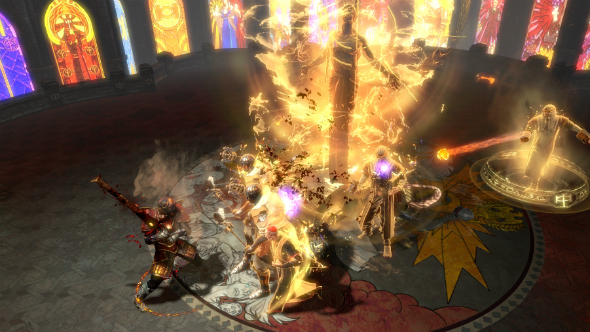 So you’ve massacred the demonic, festering hordes of Wraeclast a few too many times over and are sat twiddling your thumbs wondering what or who is left to plunge your axe into next. How about the people who exiled you to Wraeclast in the first place? The Fall of Oriath lets you get your revenge on the civilization that cast you out, including the gods themselves.

The Fall or Oriath is the first time you get to see the ancient Greek-inspired nation so central to the game’s plot. And because this is Path of Exile, you’ll be charging through the streets mowing down guards with chain attacks in a rampage against the oppressive theocracy that rules over Oriath. Your journey will take you through frozen mountaintops, immaculate temples and crumbling city streets.

After playing through the first four acts of Path of Exile the player has conquered most of the enemies he’s aware of,” explains lead producer Chris Wilson, “and so as far as he’s concerned it’s time to go home. They are told that they can return to the island of Oriath, which is the place they were exiled from, by retrieving a device from the top of Mount Veruso, this snowy mountain. So they climb the mountain and return home. But arriving in Oriath they realise they are in the middle of a slave revolt, so they initially portal into these slave pens. 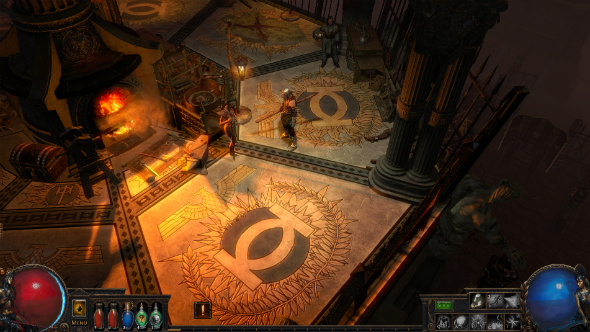 “This island is controlled by a temple theocracy, which is this very powerful, magic-using order, and they’re causing a lot of problems and tension with the slave population. The player is sympathetic towards the slaves and decides to help them out with a good old revolt. The first half of the act deals with the fact that you’re helping the slaves, so you go through the various slave districts before you progress into the main city and try to overthrow the government.”

As Oriath is one of the only areas in the game where civilisation still exists, its art style is markedly different from the grimy, primordial scenes that make up much of Path of Exile’s current scenery. Expect to see plenty of opulence and gold trim on your trip through Oriath, sort of like Diablo III’s heaven-based act.

It’s also worth noting that Act 5 will be one of the longest acts in the game, and will include 24 bosses – some optional, most not. 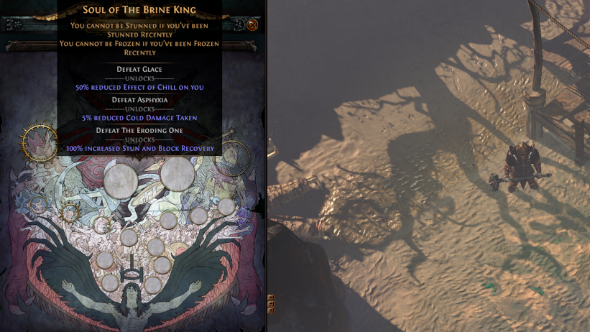 Those bosses come into play with the brand new Pantheon character customisation system. A number of the bosses in The Fall of Oriath expansion will actually be gods, and where there are gods there are powers and abilities to steal and harness for yourself – so say the principles of action-RPG design. Certain gods around Oriath unlock specific passive abilities such as Soul of the Brine King, which makes it so that you’re invulnerable to stun or frozen states for a short time after initially being stunned or frozen. There are 16 such abilities, four major and 12 minor.

However, these abilities can be improved and enhanced as you slay additional bosses. For example, if you kill Glace in addition to earning Soul of the Brine King, you’ll unlock a 50% reduction to chill effects on your character. Slay Asphyxia and you’ll gain 5% reduction towards cold damage. Finally, if you defeat The Eroding One you’ll receive a 100% increase to how quickly you recover from stun damage. It’s easy to see how besting as many bosses as possible will reap just rewards for diligent players.

The Pantheon system won’t come into effect until you defeat The Beast in Act IV though, at which point the divine powers of the world’s many gods and religions are released back into the world ready for you to acquire as you retread old ground from Act VI to Act X. 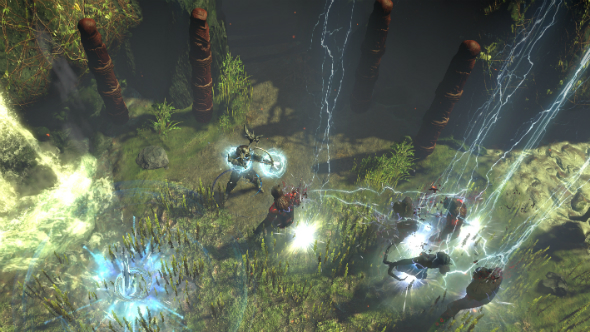 The fact that Path of Exile is getting five new acts in addition to the expected Act V comes with a minor caveat – Acts VI, VII, VIII, IX and X are effectively a reworking of the game’s original acts, with new NPCs, art styles, quests, bosses and layouts. So while these acts aren’t entirely fresh, they will feel like new areas in many ways.

Wilson talked me through the motivation for this. “The problem is the two replays in the middle. It’s not perfect and with Path of Exile coming to China it’s the complete opposite of what they’re used to playing. What we’re doing with this release is inserting an act – Act V – but we’re also creating five new acts to go afterwards. These are loosely based on the original five acts in the game and you could think of it as a second playthrough, but the content is essentially all new. The NPCs are either different from the ones before, or the same ones with different stories, they talk about what’s happened after you left. The bosses and quests are entirely different, and the locations are either re-imaginings of the old ones, or entirely new ones that you had a hint of before but couldn’t actually go and visit. For plot reasons you have to go back through the same places, but it feels very different. It’s kind of like an homage to the original acts.” 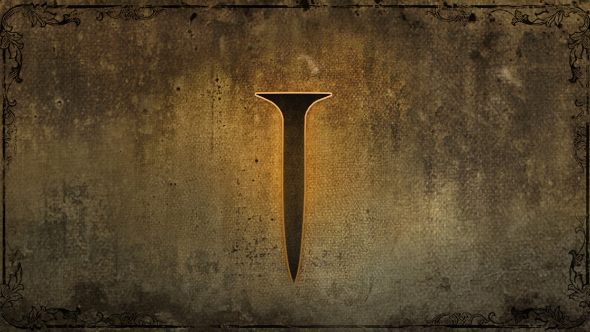 Path of Exile’s myriad challenge leagues have previously offered up many valuable and highly sought after items to players who could commit enough time and energy into mastering them. As such, there are many leagues that players have wanted to revisit, either for their sealed away items or for their unique spin on the standard gameplay. The Legacy League opens up all previous challenge leagues for players to attempt one last time. The Legacy League will be released on 3 March, 2017 at 12:00 Pacific Time. That’s 20:00 for us Greenwich Mean Time users here in England.

Here’s Wilson with a detailed account of how the league will run. “The Legacy League basically lets you choose three leagues that you want to affect you and have the effects of those three as you play – it’s slightly more complicated than that because you have to find items that represent these leagues and you can get various properties on them. The point is that every player has a favourite league and they want to demonstrate that to other players that their league is the best. So someone might work out that playing with Ambush, plus Invasion, plus Talisman might be the best option. So you have the ability to choose the leagues and see which ones carry you the furthest. One of the other things about the Legacy League is that you have the ability to find these old items again. This is effectively a final celebration of this old content before we move on with the new version of Path of Exile in the middle of the year.” 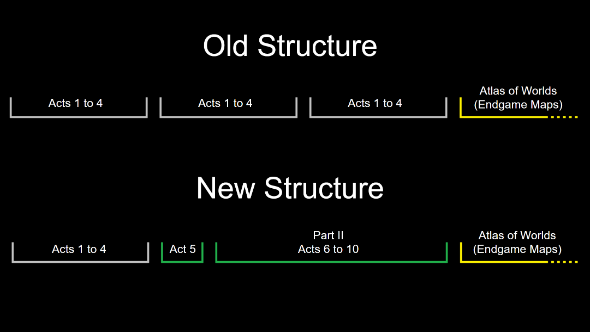 Grinding Gear Games also announced that Path of Exile is also coming to China and Xbox One this year. That news ties into the introduction of six new acts, as game’s structure will no longer involve repeating the same four acts three time in order to reach Path of Exile’s endgame. Instead, the addition of new six acts means only a single playthrough will be required to reach the Atlas of Worlds endgame; a decision that was made to help keep new players engaged with the game for much longer by ensuring they don’t have to repeat content. Grinding Gear Games are working alongside Tencent to bring Path of Exile over to the Chinese market, and anticipate player numbers that are magnitudes larger than the current worldwide player base – so here’s to many more years of Path of Exile updates.

Can’t wait to explore Oriath? Let us know why in the comments below.