Path of Exile is a game which is hugely reliant on its fanbase. A relatively generous free to play model means keeping them playing the isometric action RPG is vital to the health of developer Grinding Gear Games. They’ve no publisher cash to fall back on or boxed products to release for big windfalls, just the constant purchases of a hopefully-happy set of players. To that end they release large content expansions regularly, the latest of which is Ascendancy. We sat down with lead designer Chris Wilson to run us through it.

Need more RPG goodness? We’ve picked out the best ones.

It’s structured around a vast labyrinth that an old Emperor named Izaro created hundreds of years ago. He didn’t think his kids would live up to the task of his job, so created six trials that any successor would be able to complete and prove they were worthy of entering the labyrinth proper. They are players’ first challenge.

“Each of these trials serves as an introduction to traps that will be present in the labyrinth.” explains Chris, “A test to make sure the player understands well enough to get through. A spinning blade trap runs along grooves in the ground very predictably and you can flip levers and switches in order to change the path that they’re using. This serves as a tutorial as well because we’re using these traps unforgivingly in the actual labyrinth and in pretty interesting combinations. There’ll be spinning blades plus dart shooters or spinning blades plus lava, so we wanted to make sure that each of the trials like this introduces them one at a time so the player understands the base mechanics before they find them in the labyrinth later.” 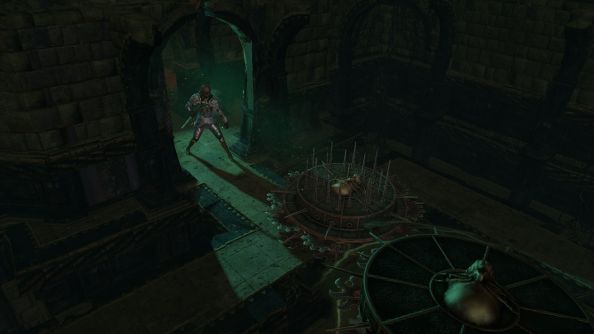 Another trial introduces the saw blade, a trap which moves back and forth along single paths on the floor. Unlike the spinning blades, they kill players very quickly and can’t be diverted. They’re more a challenge of movement, but if you come across two that are blocking your path completely, you’ll be able to put them “off kilter” as Chris puts it – desyncing their movement via nearby switches and creating a path.

Chris pointed out that these trials aren’t meant to be too challenging and are scattered through the game’s first difficulty setting, “You encounter them in the first few hours, [they’re] not just for high level players. This is important because with expansions in the past we’ve often erred on the side of adding content to the end of the game rather than throughout the game, and here we want to make sure this is accessible to players of all different skill levels.”

When you’ve ventured through the six trials, you’ll be able to start a labyrinth run. This involves heading to an arid wasteland in the world, once filled with life but aging poorly in 200 years of no irrigation. It’s meant as a staging area according to Chris, where you can gather your party before, well, you know.

“Once you enter the labyrinth, you can’t leave without aborting your labyrinth run. It’s something you have to do in one sitting, not where you can do a few levels of it and come back later or go refill your potions or add new party members, you enter alone or as a group and you go through together, if people leave then they’re removed from your party. This enables us to design it like a mini roguelike and know that people can’t just go to town constantly to get refills for their potions and heal-up.” 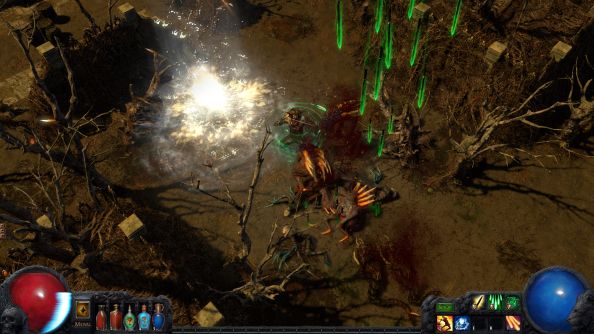 It’s a different approach that should help to build community around finding solutions and secrets in each run, much the same as large groups have built up around The Binding of Isaac and its ilk. This is helped by each labyrinth being a daily run – it’s randomly generated, but will be the same for all players globally. A new run will only take 45-60 minutes, but subsequent ones will be much faster with the aid of Reddit-based friends.

“We’re planning to do a leaderboard that shows the completion times for a given day and this will encourage people to try and plan out more efficient routes.” says Chris, “It’s not just about showing off the time you get, there’s also rewards for completing the labyrinth so having mastered a particular day’s layout means you can get the rewards more frequently. Then you have to solve the puzzle fresh on each day, so there’s incentive on playing the community game, of helping share secrets.

“There’s a lot of cool stuff that’s just hidden away, and we kind of expect players to walk past it 99 times out a hundred. Embarrassingly I’ve walked past a lot of secrets while filming [promo materials] that I later find while doing rehearsals, there’s some pretty neat stuff hidden away.” 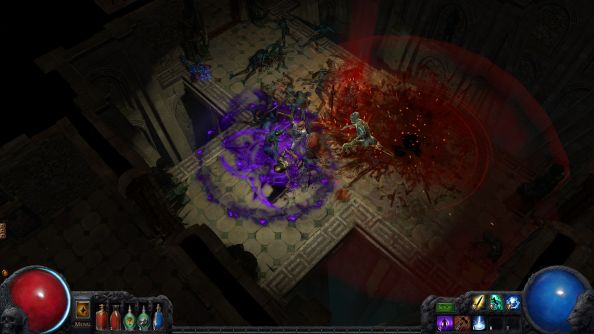 He introduces another type of trap, weight-activated spikes that pop out of the ground. They can be used to kill off enemies if the timing is right. In this particular version of the labyrinth, dying enemies drop tar on the ground that slows movement – providing a deadly extra element to dodging the spikes. Dart traps do the same thing, meaning getting hit by one causes a chain effect as you scramble glacially out of the way. Trying to get to a safe spot to dry off, the runner we’re watching discovers an alcove.

“On the wall there’s a switch that’s hard to see, it causes a hallway to open up.” Chris points out, “It leads to a secret area – there’s a monster fight in here and a red object called a mysterious dark shrine. These have random properties, but they’re the same for every day so you can log the properties and see if you like it or not. This one here curses the player with enfeeble but in return it makes the labyrinth more rewarding, it amps the difficulty up so if I know there’s an enfeeble dark shrine on this level, I can then specifically seek it out to get the bonuses and rewards. Or I can avoid it because I don’t want it to be more challenging – players will hopefully document what the various shrines do that day.”

In pushing through the labyrinth, players will find it’s split into three sections on each day. Each ends with a fight against Emperor Izaro, from which he continuously escapes until the final encounter. Chris showed us one of those too. 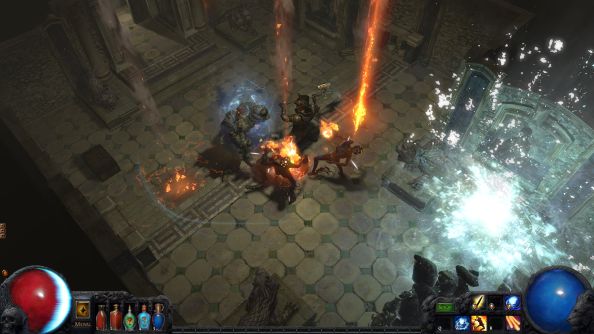 “Like the labyrinth the boss fight is random from day to day and the thing that changes is the tools that he has at his disposal. They vary a lot based on where you encounter him in the labyrinth, today’s variation is that he comes up the elevator in the middle and there are some statues that come up next to him. These statues do different things, each one embodies a different element. While the statue is active it buffs the boss, giving him that damage type on his hands as well as making him stronger and harder to kill. You need to run around tagging the statues to make sure the boss is weaker and at the end of the fight if any of the statues are still active the boss will take them with him to the next section, making it harder.

“Three different mechanics are picked on a daily basis, I think today’s is statues, runic circles and lieutenants. He also changes what weapons he uses, here he is using a sword and shield but sometimes you’ll encounter him with different weapon types and so on. We’re trying very hard to add a lot of variety because if someone is running the labyrinth, potentially a lot of times, there’s some good rewards for doing so, we want to make sure the boss fight feels different each time.”

The next time we encounter Izaro, he’s placed these runic circles on the ground. Standing inside them removes a permanent shield, switching the fight from the hectic dash between pillars in the first version to one where standing still is rewarded. Meanwhile the lieutenants version has mini-bosses turning up periodically to give you a hard time. Izaro also has some personal help in each fight.

“On top of Izaro there is a green entity, the goddess that he worshipped while he was the Emperor. She’s twinned with him in the labyrinth and she can cast spells while he’s fighting, clone herself and basically interfere with the fight in ways that benefit him. This is a first for Path of Exile, because previously a boss was a boss, did one thing at a time and was one entity but this is a case of us basically having another boss as a turret on top of the main one.” 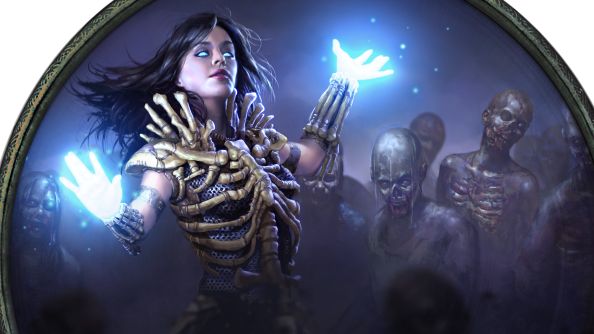 Once Izaro and his god are defeated, you’ll get access to phat loots. Part of that is the new Ascendancy class system the expansion was named for. These are enhanced versions of the base classes that naturally unlock new skills and abilities, but also focus on certain styles of play. The sword-wielding Duelist might become a damage-focused Slayer or heavily armoured Champion, for example. Progressing down these new paths involves beating the labyrinth on various difficulties to grab more Ascendancy points and specialise.

Completing runs also offers Ascendancy crafting, randomly assigned properties that can be applied to items for unique effects. One might summon swords to fight all around you, or mean your fireballs will always set enemies on fire – something I’d personally hope came as default, but you just can’t get the spellweavers these days. As you can imagine, the one you come away with might not always be useful for your build, so multiple runs will be required to optimise.

These can have a significant impact on how you play, as Chris demonstrates with a summoning witch, “If a minion dies it will create a caustic cloud that kills other enemies near it. The other skill she’s using is an offering, you sacrifice a corpse and your minions get stronger. She’s also picked [a skill] that makes her offerings buff her as well, which is completely new, because we hadn’t designed offerings to affect the player at all, having it do so really makes you become one with the minions.”

Ascendancy, its labyrinth and all the rest will be available for all players in early 2016. While previous expansions have had a lengthy public beta period, there will be nothing of the sort for this one, with all testing being handled internally by Grinding Gear Games. There’ll certainly be a few surprises left for players to discover.