Grinding Gear Games has revealed its first expansion of 2019, Path of Exile: Synthesis. This is the fifth expansion for the wildly popular action-RPG, and not only are PoE players getting new skills, tweaks, and additions, but entry to a whole other realm – with the introduction of the Memory Nexus.

In the Memory Nexus, players have to battle through decaying memory fragments where they must kill monsters and hit memory stabilisers before the disintegrating vision consumes them. That’s the sort of thing you want to get right first time. Synthesis also introduces a new challenge league, shakes up the implicit mod system with the use of frantured items, and introduces two new spellcaster archetypes for players to try out.

To help you prepare for the expansion, we had a chat with Grinding Gear Games about Synthesis and what lies in store for players.

Following the same structure as 2018, Grinding Gear is planning on releasing four PoE expansions this year. Each expansion will be released approximately 13 weeks apart, starting with Synthesis in March, then the following expansions in June, September, and December. The developer has also expressed plans to demo both the 3.9.0 update and next year’s 4.0.0 update to fans at ExileCon in November. 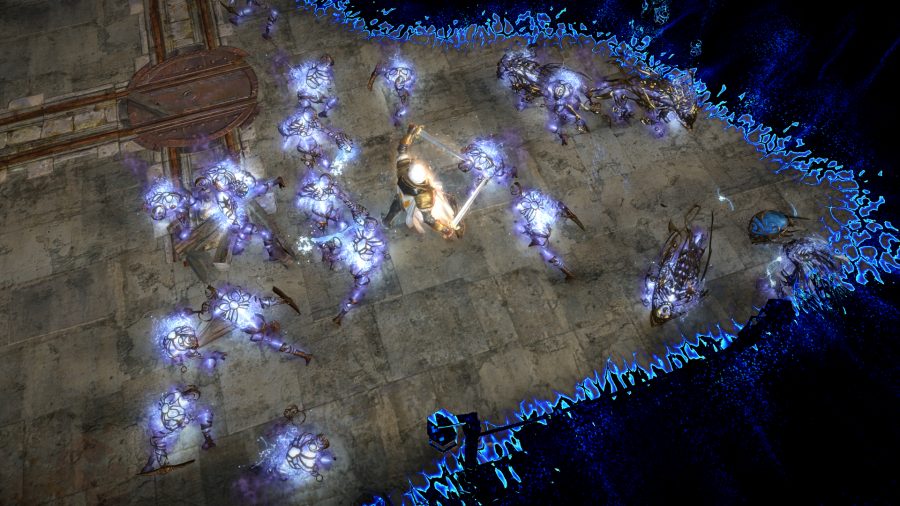 The Synthesis expansion is heavily focused on story and worldbuilding, helping players understand a little more about the lore of PoE. In the Synthesis league, players will be guided by a new NPC named Cavas, a floating spirit who has forgotten his past and identity. The player pledges to help him restore his memories and slowly learns more about Wraeclast’s history and Cavas’s role within it.

To help Cavas restore his memories you need to successfully collect memory fragments. In Synthesis league, every area contains a portal to a memory that transports you to a side area filled with monsters. Your goal is to defeat all the enemies and tag the various memory stabilisers throughout the area.

Related: Here are the best new PC games of 2019

Grinding Gear Games didn’t think monsters alone were challenging enough – and as you journey through the memories, they begin to fade around you. The walls of the area begin to decay.

Each memory has two to four stabilisers to tag – the more there are, the harder the memory is to revive. If you manage to successfully stabilise the memory, you receive a memory fragment. These memory fragments are an important part of the expansion and are your gateway to the Memory Nexus. 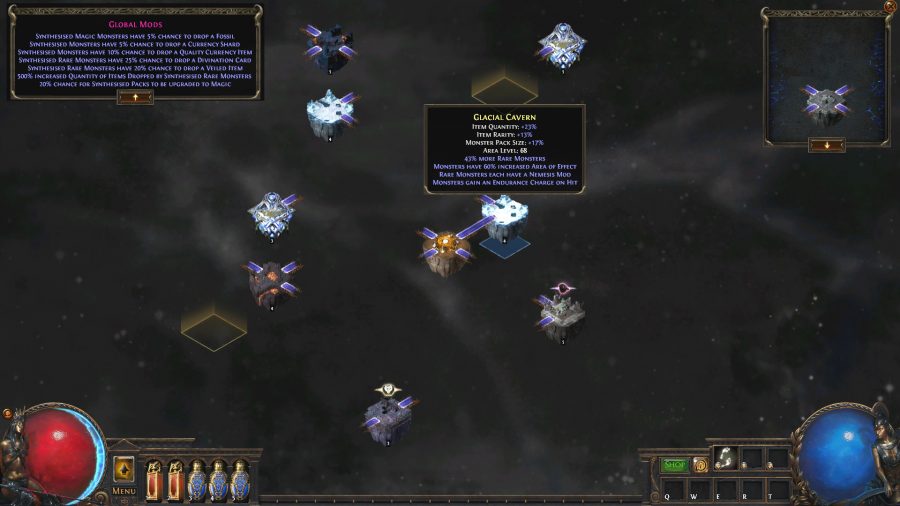 The Memory Nexus is where your fragments come into play. Floating in a sea of Cavas’s memories, here your memory fragments look like little islands that you can place on the Memory map, allowing you to explore further into the Nexus.

In-game, this abstract idea appears as a gridded game board, with the fragments its game pieces. Cavas already has some memories there himself which hold rewards, and you must place your fragments in such a way that they all connect up, creating a path to access these rewards. Once your bridge is built, you can play through the run you’ve created, fighting monsters, defeating bosses, and receiving the loot at the end. The player can decide how difficult they want their run to be by placing particular chains of memory fragments together.

Read more: Check out our list of the best MMORPGs on PC

Make sure you create your path carefully, because memories can only take a certain number of runs before they decay. When the memory completely decays, it disappears from the board.

Some memories have symbols above them, indicating a random reward, boss fight, or endgame battle that can lead to special moments.

Fractured items are new to PoE and can only be found within the memory areas of Synthesis. Due to the memories decaying, these items are damaged, meaning that some of their random properties are stuck in place, unable to be changed or removed.

This is pretty bad news if your fractured item has a negative effect attributed to it – but if it’s a good one, then the player can happily reroll its other properties to create a powerful item. Don’t worry if your pile of fractured items with bad properties is growing – they can be cobbled together and used to make Synthesised items. 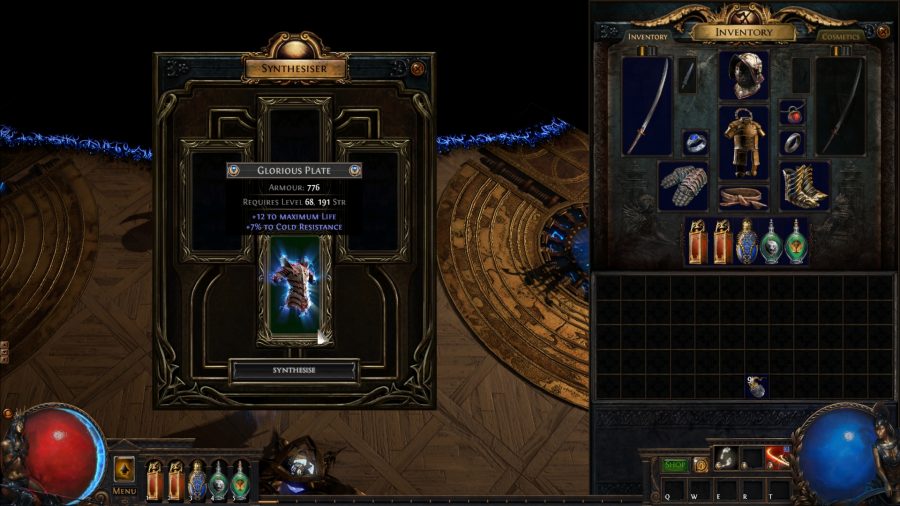 There’s always a gamble involved in implicit mods, but in Synthesis, Grinding Gear Games has shaken things up with a new system. Within the Memory Nexus there is a machine called the Synthesiser. Players must place three fractured items of the same class into the machine, which are then consumed and transformed into a single Synthesised item.

This way, players can create base items that cannot be found anywhere else in PoE. Once they begin to crack the system, they’ll be able to bring about dangerous and unique results.

Spells are a big part of PoE and contribute to the diverse range of characters you can create. In previous expansions, if you wanted to create a powerful character, then aiming for the top spells was vital. But in this new expansion Grinding Gear Games has made all spells roughly equivalent in power. This dramatic rebalance includes bonuses for handcasting, making that particular skill more tempting for players to master. 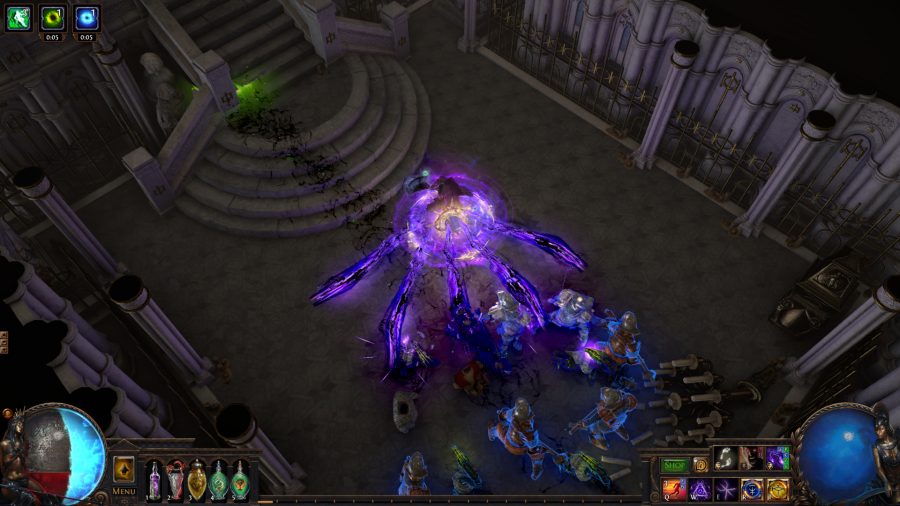 Grinding Gear Games has added two new spellcaster archetypes and six new primary damage spells to the game. The two new characters are the Chaos Spellcaster and the Holly Spellcaster. The Chaos Spellcaster uses a variety of chaos damage spells that already exist in the game, as well as several new ones. One of those is called Soulrend, a skill that fires projectiles at enemies and causes damage to them over time. It’s a slow-moving spell, and with support gems you can slow it down even more, hitting the target even harder.

The second archetype is the Holy Spellcaster. One of its holy spells is called Divine Ire – a channelling skill that, when charged up, releases a powerful bolt of holy energy at the enemy.

PoE has 16 new unique items for players to get their hands on that have a variety of interesting properties. One item, the Eternity Shroud, has a Glimpse of Eternity property attached to it – triggering a time dilation bubble when the player is hit, slowing downs enemies in its area of effect.

One final, important detail is that Grinding Gear Games is going to permanently integrate its previous expansion, Betrayal, into the core game. Betrayal had players put on their detective hats and try to uncover the secrets of a mysterious organisation who discovered a way to bring people back from the dead. Make sure you check out our Path of Exile: Betrayal guide if you want to catch up with everything there is to know before it gets added to the full game.