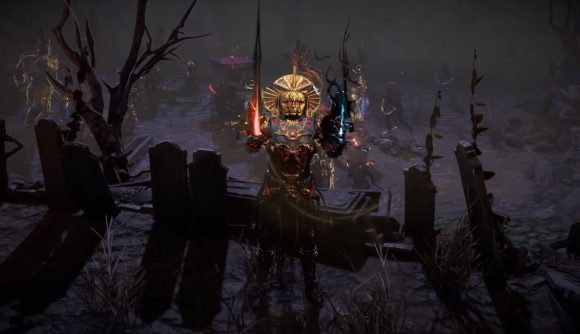 Needless to say, the launch of the latest expansion for Path of Exile, Ultimatum, has not gone too smoothly. In a Reddit post, developer Grinding Gear Games acknowledges the criticisms, and explains what happened in the RPG game.

The explanation was written by lead developer Chris Wilson, who discusses the “rough” launch in some detail. For many players, getting into the new content was laboriously slow, making them sit in a queue that could take up to two hours. Wilson says this was a result of “human error” because a migration process that’s normally done playerbase wide in the days leading up to an expansion didn’t happen.

A temporary solution was put in, but this caused players to taken out every ten minutes or so, a less than ideal situation for an MMORPG game. “Aside from catastrophically ruining our launch day, it completely mystified us because we have been so careful with realm infrastructure changes,” Chris writes. “We thoroughly tested them internally, peer code-reviewed them, alpha tested them, and ran large-scale load tests up to higher player capacities than we got on launch day.”

Thankfully, a fix has now been found, involving an hour or so of downtime today. Players sometimes discover problems with their inventory after these sort of server issues in Path of Exile, and Grinding Gear is “keeping a close eye” on anything untoward like this happening.

As all this was happening, the community was further inflamed because of certain streamers getting favoured access to the fantasy game. Some personalities were contracted for two hours of paid playtime on stream on the day of launch, the same length of time as that login queue. In order to try avoid these creators streaming a login screen for that entire segment of advertising, the “hasty decision” was made to make them a priority. Wilson expresses regret over this choice.

“It offended all of our players who were eager to get into the game and weren’t able to, while instead having to watch others enjoy that freedom,” He explains. “It’s completely understandable that many players were unhappy about this. We tell people that Path of Exile league starts are a fair playing field for everyone, and we need to actually make sure that is the reality. We will not allow streamers to bypass the login queue in the future.”

The post concludes by saying it’s not “trying to convince you to be happy with these outcomes”, simply to explain what happened, why, and the remedies being taken. “We’re very unhappy with it too,” Wilson says.

You can watch the long content reveal for Ultimatum below:

Servers should be stable, if you want some good old fashioned dungeon-crawling while we wait for Diablo 2: Resurrected, and Diablo 4.