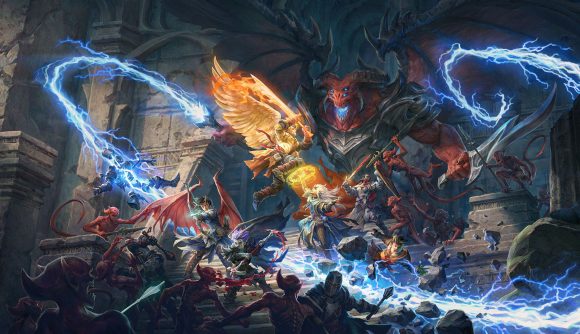 Owlcat Games has announced the sequel to Pathfinder: Kingmaker – it’s named Pathfinder: Wrath of the Righteous. The new game is “not a direct sequel”, Owlcat says, but will “expand and elaborate on the core elements” of Kingmaker.

The developer continues: “New features include the mythic progression system, a new corner of the award-winning Age of Lost Omens setting to explore, and more classes and character customisations drawn from Pathfinder’s extensive history.”

A Wrath of the Righteous release window has not been revealed. Owlcat has, however, confirmed the return of creative director Alexander Mishulin and lead writer Alexander Komzolov, while Chris Avellone is “lending a hand” once again. The isometric CRPG will have “an improved visual style” and “a look and feel distinct from that of Pathfinder: Kingmaker.” Additionally, Owlcat says Wrath of the Righteous will contain new character classes as well as many returning ones – including the witch and oracle.

Further details about the project are still thin on the ground; aside from the above details and image, Owlcat is keeping its cards close to its chest for now. It did, however, say more details –  including additional classes and character options – would emerge in the near future.

Wrath of the Righteous and its predecessor, Kingmaker, are based on Pazio’s tabletop RPG Pathfinder. The first video game launched last year to mixed reviews.