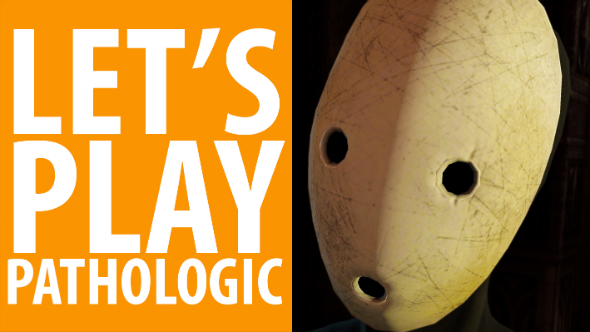 Hoo boy. This isn’t the first time Phil and Joel have been confronted with a surprise bovine appearance in a Let’s Play this year, but all things considered, it’s the strangest. In fact, every item and feature in Pathologic is the strangest everything of the year.

In the mood for reflection on the last 11 months? Check out the best PC games of 2016 so far.

The build we’re playing, The Marble Nest, is a vertical slice of gameplay available to Kickstarter backers who pledged $80 or more. It’s intended to give an idea of the tone and mechanics of the final game, only in a small and digestible portion that the devs can polish mid-development. It’s unsettling like waking up to find Gary Busey sitting at the foot of your bed, whispering his dreams at you.

This new crowdfunded game is a reimagining of the cult 2005 hit, in which you play a doctor at a time of plague, pestilence and disaster. Seriously, death is just always showing up for a high-minded chat in this game.

It’s definitely intended as a long-form experience, and the largely un-voiced dialogue interactions aren’t to be rushed through if you want to get the most from Pathologic. However, there are moments of high-octane: like Phil slapping a man called Marat very gently until he dies.

For more like this, subscribe to PCGamesN on YouTubeso we can go skipping off into the sunset together.