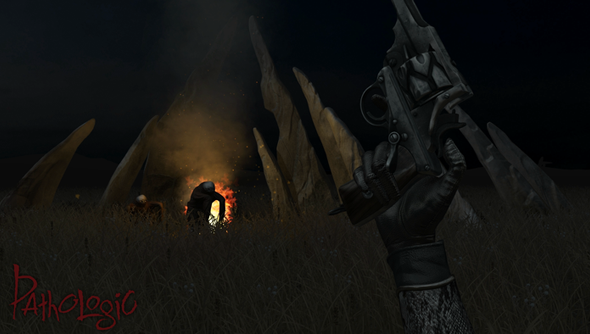 To call the original Pathologic a flawed gem would be misleading, because that might imply it could be polished up – perhaps with a fresh lick of lighting, at a new resolution.

But Pathologic is a game about broken things. It’s a simulation, but not of anything you’d ever want to experience. A living, breathing world, but one “short of breath”. On a thematic level, it can never be fixed. Nevertheless, more than 5,600 backers have paid to see its plague-ridden town rebuilt, and its intentional flaws amplified.

The new Pathologic will be much like the old one released in 2005 – only kitted out with better graphics, localisation, balanced difficulty and new quests.

It’ll be a surrealist, first-person story played out over twelve in-game days, as a town is slowly devoured by plague. There’ll be no tangible “bad guy”, and no answers that can provide a full perspective as to what’s going on – just a pressing need for survival, and to press on.

Tiny Russian studio Ice-Pick Lodge announced at the weekend that they’d moved to the Land of Funded Projects, and were “looking at its inhabitants curiously”.

“The requirements for entering the place are a feverish glint in the eyes and cheering people in the comment section. Seems like we have both,” they wrote.

The developers said that they considered their backers not to be fans, but friends.

“A good friend is not necessarily someone who approves of every step you make – friends can and should be critical,” they said. “But it’s also someone who’s always there when you need them. It’s not even about the money; money is important, of course, but it’s only a tool. What you’ve done is you’ve fuelled our small factory.”

Ice-Pick have come up with several stretch goals to fuel the remaining six days of their campaign. If funding hits $300,000, they’ll infuse the game’s town with more unique objects, dialogue options, questlines and events. At $350,000, they’ll extend the area outside the town’s boundaries: the steppe.

At $400k we can expect surrealist interactions brought on by the plague, and at $450k, the fully-realised innards of the town’s termitary and abattoir buildings. And should the campaign reach $550,000, Ice-Pick will develop an extra day-long story to elucidate events prior to the game’s beginning.

Have you helped fund this wonky Deus Ex descendant?