I don’t think I’ve ever wanted anything else from a videogame, I just didn’t realise it before. Paws is the next game from Team Might and Delight, the folks behind woodland mom’em’up Shelter and its sequel. This is set in the same world as the lynx-based Shelter 2, but this time you play as one of the cubs trying to find its lost, lonely road back to mother. Perhaps unsurprisingly, it’s adorable.

If it’s as good as it is cute, Paws will skyrocket to the top of our best PC games list.

They say the main themes are companionship and overcoming the odds. Best guess puts the bear cub pictured above and featured below as your best bud, letting you climb on them to reach higher platforms and suchlike.

While it is a sequel to Shelter 2, it’s fully standalone and doesn’t require the studio’s previous titles to get playing. It looks like it’s using a similar control scheme and style, but entirely different ways of exploring the world and mechanics to interact with it. You’re following tracks and solving puzzles with the help of the bear, rather than trying to find your lost babies and stop them getting eaten in previous games.

Inevitability of bear death aside (another quoted theme is ‘loss’, they’re not even hiding it), it’s also out relatively shortly, launching on Steam come March 24th. There’ll be an expanded version of the game that will come with the soundtrack and an ‘interactive book’ called The Lonesome Frog, which will look like this: 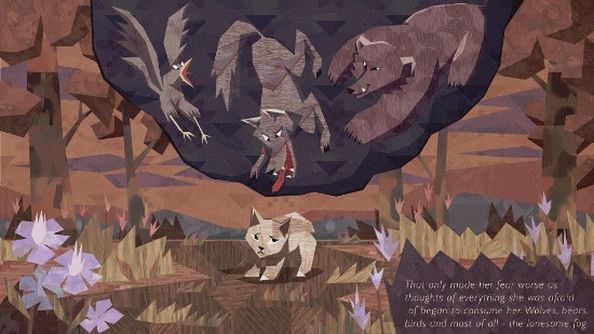