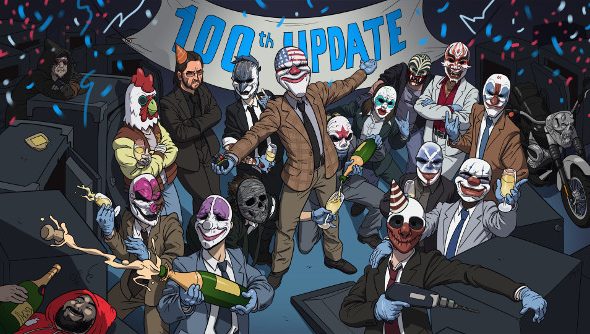 If ‘fiasco’ was ever the correct word for a videogame controversy, it was certainly when microtransactions were introduced into Payday 2 after it was promised, before release, they never would be. Now, less than a year after they were added, they’re being effectively removed by making all future ‘safe drops’ – the crates of loot that would be randomly acquired through play – free to open. Items can still be traded on the Steam community marketplace. The change was announced as part of the 100th update to the game, where developers Overkill, part of Starbreeze, announced they had bought back the rights to the franchise from publishers 505 Games.

Still want a new shooter to play? Here’s the best FPS games we could find.

These announcements were debuted in a community video, as well as attached blogpost and press release.

As you can imagine, the reaction from the community has been quite positive. It never sat well with some that Overkill went back on their word, even though that promise was made when the landscape of games was different. The argument goes that if they were willing to make a change to that policy in response to new market factors or other economic concerns, they shouldn’t have made it in the first place.

That aside, the incoming skill tree and community grenade are also highly anticipated. Details on them will be released in another post on Thursday, along with a Twitch AMA with four members of the dev team on Friday. More info in the Steam community post.

Towards the end of the above video, Overkill show off an E3 2016 teaser for new Payday 2 updates – part of their upcoming further 18 months of support – with a live-action scene featuring the debut of a new biker character. Here it is seperately, so you can count how many times the chap with the cigarette puts it in his mouth but never does anything with it.

As for the business side of things, it cost Starbreeze $30 million worth of shares to buy Payday 2 back. They now get full revenue from Payday 2 and other games attached to the franchise, with the exception of a possible sequel. In return, 505 now own 4.3% of the company, with a 1.4% vote share. This is a significantly lower amount of influence than a standard publisher-developer relationship, and has rather allowed Overkill and Starbreeze to shift blame for the microtransactions onto the now-dissolved partnership. Exactly who asked for what in regards to the system we may never know, but many players are just happy that it’s gone.