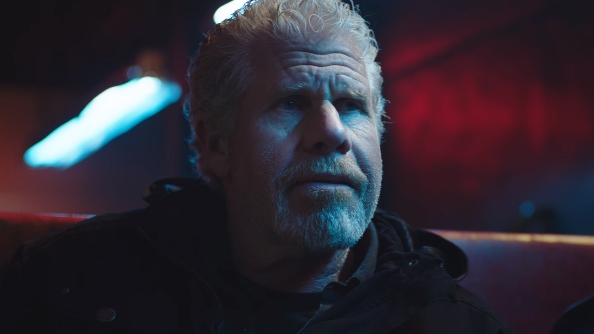 Payday 2’s next DLC is The Biker Packs, and standing centre stage for them is Ron Perlman, he of Sons of Anarchy fame. It looks like he’s playing a pretty similar character too: a shotgun-swinging bike gangster with complete disregard for the law.

The trailer, which is live-action akin to pretty much everything coming out of Payday 2, shows Perlman accept work from the payday bosses. On his way he’ll bump into someone who looks rather like his ex-Sons of Anarchy co-star Charlie Hunnam, and a few people he really doesn’t like. Perlman is also offered a clown mask sporting horns in a nod to his days as Hellboy.

The DLC itself comes in two parts: the Bike Heist and Biker Character Pack, priced $6.99 and $4.99 respectively.

The Heist includes a two day heist, the CR805B submachine gun, a throwable axe, four masks, patterns, and materials, and six unlockable achievements. The Character Pack allows you to play as Perlman himself (AKA Rust), use the Biker perk deck, a Breaker shotgun, a chain whip melee weapon, and two new masks.

If you fancy going all Hell’s Angels in Payday 2, The Biker Packs will be available on June 16.