Perhaps some of the most exciting ongoing advancements in computer tech are those made in data transfer. PCIe, the serial bus standard, connects many of our data-chugging components to the CPU or chipset, and each iterative generation increases data transfer bandwidth and speed astronomically. We’re only just beginning to switch to PCIe 4.0, but already PCIe 6.0 is well underway.

The The Peripheral Component Interconnect Special Interest Group (PCI-SIG) consortium (via VideoCardz) has recently told us some more about the upcoming PCIe 6.0 standard, as well as PCIe 4.0 and 5.0. The two main takeaways are that PCIe 6.0 should double the bandwidth of PCIe 5.0, with a bandwidth of 64 GTps (gigatransfers per-second), and that the specification should be finalised in 2021.

Most of us are still using PCIe 3.0 to connect the best graphics cards, best SSDs, and best CPUs to each other, as PCIe 4.0 has seen a slow debut on motherboards, especially for Intel. But we’re expecting the Intel Rocket Lake-S and AMD Zen 3 platforms to usher in the new interconnect standard.

AMD is ahead of the game when it comes to PCIe 4.0, with its B550 and X570 motherboards, as well as Zen 2 Ryzen 3000 series processors, supporting the standard. Intel, on the other hand, is lagging behind slightly with its 9th and 10th Gen Core processors and compatible motherboards only running PCIe 3.0. It’s only next year, with next-gen Rocket Lake-S processors, that we’re expecting to see an Intel PCIe 4.0 platform. 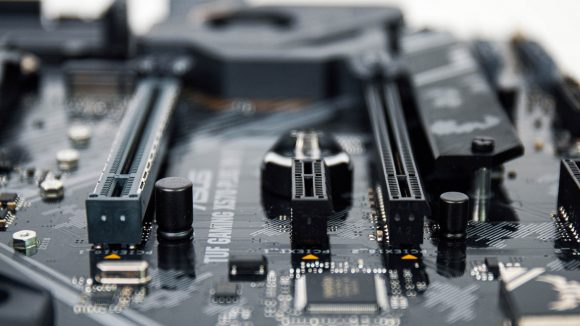 Each new iteration of the interconnect standard seems to double the bandwidth of the previous one, and this dramatic increase in data throughput has led many to question whether we need any more than PCIe 3.0 offers at all. Yes, SSDs can utilise this extra throughput, but graphics cards don’t currently need to, and who really needs 16GTps from the SSD anyway?

The answer is that soon, we might do. Games have seen a growing reliance on memory and data transfer speed as graphical fidelity and resolutions increase massively, and it’s only going to continue in this direction as next-gen consoles are released with their fancy new storage technologies. We’ve already heard rumours that next-gen graphics cards could have up to 24GB of memory. All in all, it looks like super snappy transfer speeds will be one of the few new advancements that push gaming forwards, along with AI and properly optimised ray tracing.

At around the same time as PCIe 4.0 should hit the mainstream PC gaming market in 2021, we should also see PCIe 6.0 specifications finalised, according to the PCI-SIG. This standard is designed less for the consumer and more for large-scale computing – which makes sense, as consumer hardware and applications wouldn’t know what to do with a data transfer speed of 64GTps. But who knows what the future will hold?