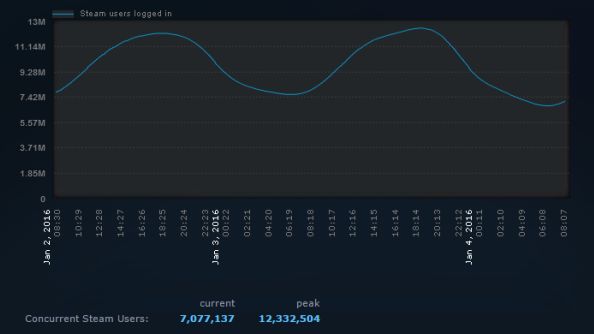 Valve are rolling into 2016 with a new peak concurrent Steam users record, at least according to the eagle eyed trackers of NeoGAF. Yesterday at around 18:30 GMT, the service managed an impressive 12,332,504 gamers playing, trading and, perhaps most importantly, buying their games through Steam. The largest games on the service continue to be Valve’s pair of e-sports juggernauts, Counter-Strike: Global Offensive and Dota 2, with hundreds of thousands of players nailing headshots and last-hits at all times.

Get the jump on Dota 2 with our best heroes for beginners guide.

According to thisNeoGAF thread, it’s an increase of just under four million concurrent users since this time last year, and a fair million and change since just a few months ago. While they didn’t hit peaks of their own, Dota 2 managed a more than respectful 940,373 users and CS:GO hit 643,402. The all-time peaks for each are 1,262,612 and 823,694 respectively, according to SteamCharts.com. This is pretty good news for Dota 2, which suffered a significant player numbers dip after the release of the controversial and still-problematic Reborn update last year. It hasn’t quite returned to former glory, when it averaged over 600,000 players in February last year, but it’s on its way.

On the non-Valve front, Fallout 4 and Grand Theft Auto V sit in the third and fourth spot, doing incredible numbers for a pair of games with no or comparitively little multiplayer focus. If precedent, and the rest of the current top ten, are to be believed then they’ll remain there through the power of mods. Of those games doing so well, the most interesting to me is Civ V – it’s a fairly old game and even though it’s a well-known franchise, that a grand, slow strategy can even keep pace with its peers in 2016 is surprising.

Amazingly enough, it’s debatable if this is even the majority of PC players. At last count, and as the final numbers we may ever get, there’s over five million World of Warcraft players still logging in once a month, or at least paying for the privilege. Last we heard there were 40 million Hearthstone accounts out there too. Meanwhile, Riot haven’t given numbers in about two years, but theirofficial sitestill boasts a 7.5 million daily peak – rather blowing Dota 2’s numbers out of the water. In fact, it’s more than twice the entire Steam top 100 put together, which is around 3.3 million on today’s numbers.

Congratulations on playing lots of games. What have I missed in my stats-trawl, or what surprises you in Steam’s record list?