Per Aspera is a charming little city builder wrapped in a gargantuan strategy game. Its vast scope encompasses such intricate details as small cargo holds and worker stations, yet your playground is the entirety of the surface of Mars. Its charm is sometimes at odds with its scope – perhaps it’s more twee than it intends to be – but it certainly delivers the anticipation and awe of discovering, settling, and surviving a new frontier.

Part of that is surely its authenticity. Mars’s topography is based on geographical data from NASA, and my mission – as an AI tasked with preparing Mars for human habitation – draws upon scientific studies and theories proposed by real space agencies and engineers.

Later in the game, you’ll see blue oceans fill in the lower elevations of the surface as you reach the terraforming stage, but here at the start of my mission, I begin with only a landing site, a small pile of resources, and one robotic worker. I’m a little adrift – the controls aren’t as intuitive as I need them to be – but the tutorial does a good job of giving me small objectives to build a base. And, after a bit of poking around the UI to figure out how, I’m soon producing my own iron, carbon, and chemicals, my little worker dutifully ferrying them to where they need to be.

Following said poking, Per Aspera becomes straightforward to navigate. The oversight of my base and buildings is easy to keep on top of with clear overlays showing areas I’ve yet to explore, which buildings are in need of maintenance, and – by far the most frustrating – how little power I always seem to have. (I soon learn that this is my mistake: I have underestimated the game’s mechanics of power collection and distribution, and not thought much about where to place my batteries and solar panels. My solution to this is to brute-force it: later in the game my building percentage is mainly power sources.) In time, though, my early tasks are ticked off, my resources are accruing, and I’m ready to expand what I’ve already built. 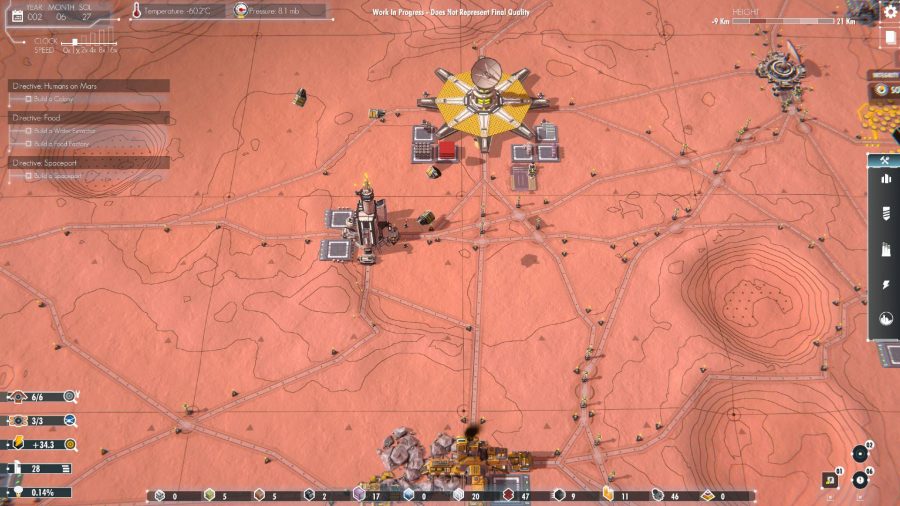 Of course, as is usual in any first contact with a city-building mechanic, my expansion is haphazard. I add new buildings and worker paths impulsively until they become a dense, confusing, and treacherous web. Workers emerge from new workshops and hubs, criss-crossing my base and buzzing around each other at road junctions like commuters at rush hour. I try not to look at the worker traffic overlay, as a deep red glares back at me to signify that there is indeed a problem. Thoughtfully planning my base’s layout falls by the wayside in favour of meeting objectives and branching into new areas, my exploration guided by an urge to swallow resources and avoid unruly terrain rather than efficiency or aesthetics.

There's a childlike sense of wonder in the size of Per Aspera, mingled with an intense fear of the unknown

Although Per Aspera is a city building game first and foremost, there is a fair bit of strategy in managing your economy. This applies both in choosing its long term direction and juggling its day-to-day balance: I need to ensure there’s enough silicon in the bank (rather than something so useless to a robot colony as money) and that the mines and factories are getting what they need, including regular attention from the workers. I’ve a number of tools at my disposal to help with this, such as instructing buildings to hurry along resources, which is especially useful if new construction stalls due to a lack of the required material. It’s all pleasantly and engagingly challenging to keep on top of.

My ultimate goal is to render Mars safe for human habitation. I am an AI commanding robots to roll out the welcome mat for the first wave of colonists, and there’s still plenty of exploring to do before they’re ready to arrive. Little question marks are scratched onto the surface of the red planet, indicating abandoned buildings and pockets of resources for me to uncover. As I rotate the planet further (you can rotate the planet), I spy a dust devil headed my way, and a large, black crater from the impact of an asteroid. 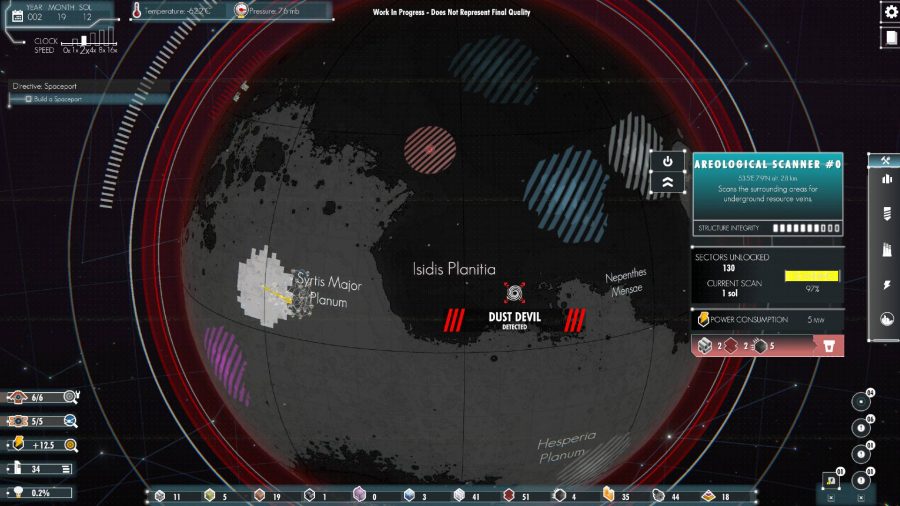 I’m looking forward to seeing where Per Aspera takes me next. The first colonists are just about to land in a cushy base that my robotic minions have devotedly spent three years preparing. There’s something admirable about their diligence: they are uncomplaining and selfless as they dig for water and build food factories to welcome the arrival of people.

There’s a childlike sense of wonder in the size of Per Aspera, mingled with an intense fear of the unknown and the daunting scale of the mission to tame it. But underpinning it all is an implicit reverence for structure and rules: these little robot workers will pull from this planet what I need to tame it, if only I instruct them well. They are my key to making Mars manageable, one bite-sized chunk at a time. Perhaps the twee is more at home in the context of the vast than I’d thought.

Per Aspera is due to release later this year. Head to the Steam page to learn more.