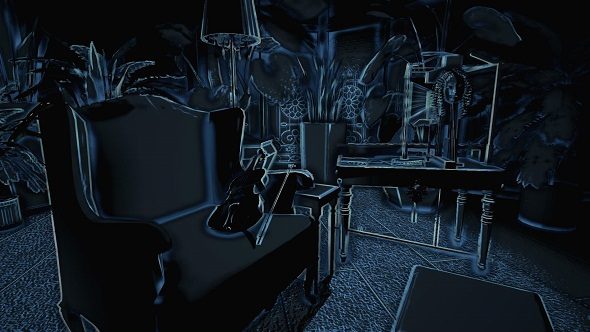 Forget being afraid of the dark, it’s silence you’ve got to be afraid of. Created by The Deep End Games, a studio made up of developers who worked on the original BioShock, their first game Perception is set to launch May 30 on PC.

For more spooks and scares, check out this list of the PC’s best horror games.

Taskingplayers as protagonist Cassie, it’s your job to explore an abandoned estate which has been constantly hauntingher dreams. Being blind, Cassie relies on her extraordinary hearing and wits in order to navigate through the mansion. As a result, objects in Perception fade in and out of view based on the ambient sound level. Creating lots of noise will light up the world via echolocation, but it may alert the mysterious ‘Presence’ that dwells within the mansion.

While invisible to the human eye, this ghostly Presence can be seen via Cassie’s echolocation, requiring her to make noise in order to spot this evil spirit. As you can no doubt guess, making too much noise will draw the Presence towards you, making exploring Perception’s haunted house a nerve-wracking experience.

By solving mysteries of the mansion’s past, players can radically change its layout and unlock new arenas. Once all the mysteries around this mansion and the Presence are put to rest, Cassie’s nightmares will finally subside. However, I’m certain the other creatures haunting the estate will have something to say about an outsider destroying their home.

Citing Alien: Isolation as one of its main inspirations, Perception looks both intriguing and terrifying with its soundwave aesthetic and stalking apparitions. For those wishing to brave the auditory nightmare, Perception is set to release May 30 on PC.