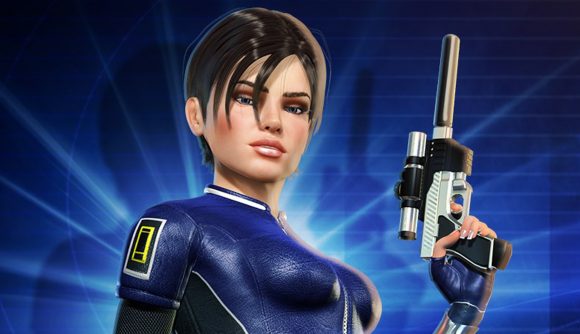 The new Perfect Dark reboot is getting some help, apparently, from the studio behind Tomb Raider and Marvel’s Avengers. The Initiative – the new Microsoft-owned studio started exclusively for Perfect Dark – is teaming up with the Square Enix-owned Crystal Dynamics for unspecified reasons.

The Initiative was formed around 2018 by Microsoft to build big-budget titles for Xbox and PC, and in 2020 at the Game Awards it was finally confirmed that the studio’s first game would be a reboot of FPS series Perfect Dark – a series that has had all of two releases in over 20 years, only one of which was any good.

The new studio is actually mostly made up of veterans from Tomb Raider studio Crystal Dynamics, including studio head Darrell Gallagher and Tomb Raider/Rise of the Tomb Raider director Daniel Neuburger – so there is a reason why The Initiative is “partnering” with Crystal Dynamics specifically. However, it’s interesting that Microsoft would let them team up with a Square Enix-owned studio when it has many internal studios who know more about the FPS genre – Halo Infinite’s 343 Industries, for example.

The announcement suggests the partnership is based on getting Crystal Dynamics’ help with building “character-driven games” – the same way it did with the Tomb Raider series – rather than actual gameplay advice. The Initiative also confirms that Perfect Dark is still a first-person shooter, if that was in doubt – but is also “still early in development” so don’t expect to see it released for a long time.

The teams couldn’t pass up a chance to work together. We’re still early in development, but incredibly excited to use this unique opportunity to deliver on the vision for Perfect Dark!

Currently the only way to play the two Perfect Dark games on PC is by streaming them with Xbox Cloud Gaming. Perfect Dark was Rare’s follow-up to its other FPS classic GoldenEye, which also isn’t on PC although there is still an emulator with mouse-look.