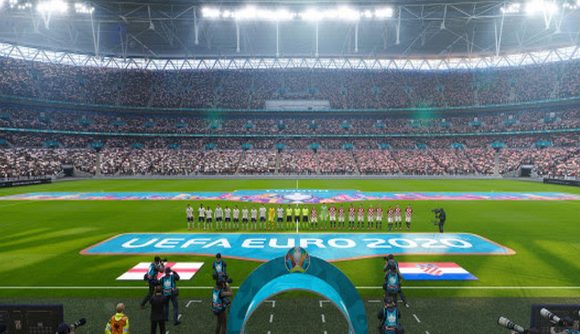 Good news, PES 2020 fans – Konami’s just announced the football game’s new DLC: a UEFA Euro 2020 content drop, packed with all UEFA national teams, a tournament mode, stadiums, and more. Oh, and it’s totally free as part of Data Pack 7.0 for anyone who “currently owns or is looking to purchase” the game on Steam.

That’s according to a press release unveiling the new content, which explains, because the tournament will now take place next year, “adjustments have been made to the contents of the free update” accordingly. The pack contains all 55 of the UEFA tournament’s national teams, as well as its squad rosters and existing team kits. Plus, it naturally brings the official tournament mode for UEFA Euro 2020, along with “faithful and highly realistic recreations of Wembley Stadium and Saint Petersburg Stadium”.

The official Group Stage match ball for the Euro tournament is also included in the update, and Konami reveals UEFA Euro 2020 “Featured Players, themed Matchdays, and other in-game events are planned” – though details on these will follow later on.

The Data Pack 7.0, additionally, ushers in seven “new Iconic Moment Series Legends” which you can access via the game’s MyClub feature. These are as follows (via Konami):

The new PES update is already live, so go get stuck in if you’re keen to dive into the new UEFA Euro 2020 content now.