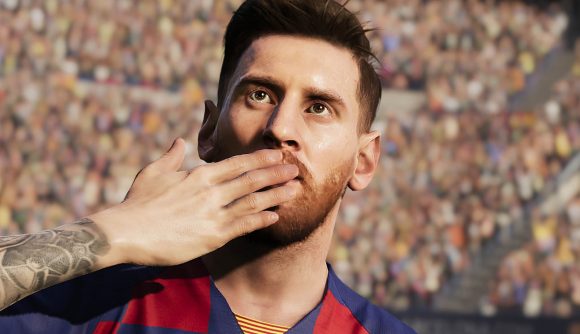 Konami has revealed that PES 2020 will receive a free content update next month to add in all the official teams, kits, and squads from this summer’s European Championships. The Euro 2020 DLC will be released for free on April 30.

All 55 UEFA national teams will be included, so it’s not just the sides who’ve made it to the final – it’s all those who entered the qualifying stages, too. As well as all those additional, up-to-date squads, the update will include Wembley Stadium, the venue of the Euro 2020 final and home of the England national team, as well as Russia’s Saint Petersburg Stadium. The official match ball is included at launch and will be joined by the final’s ball in “late June”, according to Konami.

In terms of modes, there will be an official Euro 2020 tournament option and Euro-themed Matchdays – including “online challenge events … held throughout the tournament” – as well as Euro-themed featured players in myClub.

Despite all the excitement, it remains to be seen if the real-life tournament will actually go ahead. With games industry events such as E3 getting cancelled and the sports world following suit – all Italian, French, and Spanish league matches are currently postponed or being played behind closed doors, for example – it’s not certain Euro 2020 will start on schedule, if at all.

UEFA’s current position is that the tournament will go ahead as planned, but that could change if the COVID-19 crisis worsens or if domestic competitions are unable to be concluded before the tournament’s scheduled start date of June 12.

The announcement of new DLC comes soon after Data Pack 5 was released. The patch brought new player faces and kit updates while kicking off a new Iconic Moments Series, which celebrates legendary players and their most famous contributions to the football pantheon. For more great football games (or soccer!), hit the link and we’ll treat your eyes to some of the best.