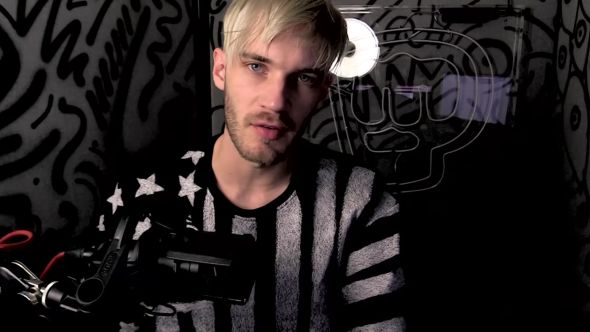 Update February 16, 2017: PewDiePie released a new video today addressing the recent controversy surrounding one of his videos, in which he paid some less-privileged people $5 to hold up a placard saying “death to all Jews”.

In the video, PewDiePie apologises for the stunt. “I want to address the biggest issue first,” he says after three minutes of hitting out at the media for allegedly misrepresenting him, “which I think is the whole guys holding up the sign thing. I’m sure you’ve seen it, it’s been everywhere. A lot of people loved the video and a lot of people didn’t, and it’s almost like two generations of people arguing.

“My intention was to just to show how stupid the website is and how far you can push it by paying five dollars. I’m sorry for the words that I used, as I know they offended people and I admit that the joke itself went too far.”

Other than that short apology, the rest of the video is spent attacking the media for their coverage of the joke. PewDiePie feels like he’s been misrepresented, particularly by the outlet that broke the news. He also feels like the media jumps on any negativity while not covering the positive things he does, such as raising money for charity.

Ultimately, he feels like this is all caused by media jealousy – their fear of becoming irrelevant in the rise of influencers. You can watch his full video here:

Update February 14, 2017:YouTube has canceled the second season of PewDiePie’s reality show and dropped him from a premium ad scheme.

Just hours after the decision by Disney’s Maker Studios to sever ties with PewDiePie (see original story, below), YouTube is now also distancing itself from its most-subscribed content creator. The Google-owned video platform has scrapped the second season of PewDiePie’s reality show, Scare PewDiePie, and is removing his channel from their premium advertising scheme.

“We’ve decided to cancel the release of Scare PewDiePie season two and we’re removing the PewDiePie channel from Google Preferred.”

Google Preferredis an ad service that aggregates YouTube’s top channels into categorised packages, which it then offers to potential advertisers at premium rates. It assures its customers that the content of those channels is “the most engaging and brand safe” on YouTube.

Scare PewDiePie was one of the first shows on YouTube Red, YouTube’s subscription service for its original programming. It was a reality show in which PewDiePie was put through frightening situations inspired by videogames, and was renewed last June. Presumably many episodes of that second season are already in the can, but it seems YouTube are willing to leave them there to disassociate themselves from PewDiePie.

Many thanks to Variety.

Original story February 14, 2017: Maker Studios, a media network owned by Disney, have cut their ties with PewDiePie after he published a number of videos with anti-Semitic jokes.

A review by the Wall Street Journalfound that nine of PewDiePie’s videos over the last six months featured Nazi salutes, images of Hitler and swastikas. Last month, videos on his channel featured a man dressed as Jesus Christ saying “Hitler did absolutely nothing wrong”, and a clip of two Indian men holding up a sign saying ‘Death to all Jews’ while dancing and laughing. PewDiePie, whose real name is Felix Kjellberg, used freelancing website Fiverr to pay the two men to do this. That video has since been removed, along with two others.

“Although Felix has created a following by being provocative and irreverent, he clearly went too far in this case and the resulting videos are inappropriate. Maker Studios has made the decision to end our affiliation with him going forward.”

To ‘clear some things up’, PewDiePie published a statement on Tumblr. With respect to the video with the sign, he says he “was trying to show how crazy the modern world is, specifically some of the services available online. I picked something that seemed absurd to me – that people on Fiverr would say anything for five dollars.” In that video, he is clearly shocked, said he didn’t think they would actually do it, and that he doesn’t feel proud of it.

“I make videos for my audience,” says PewDiePie in his statement. “I think of the content that I create as entertainment, and not a place for any serious political commentary. I know my audience understand that and that is why they come to my channel. Though this was not my intention, I understand that these jokes were ultimately offensive.

“As laughable as it is to believe that I might actually endorse these people, to anyone unsure on my standpoint regarding hate-based groups: No, I don’t support these people in any way.”

On January 12, a few weeks before the the Wall Street Journal’s review, a neo-Nazi blog (which we won’t name) published an article applauding PewDiePie’s content. It has since been taken down, but it said “he could be doing all this only to cause a stir things up and get free publicity… ultimately, it doesn’t matter, since the effect is the same; it normalises Nazism, and marginalises our enemies.”

Jonathan Vick of the anti-defamation league, speaking to the Wall Street Journal, said of PewDiePie’s content “just putting it out there brings it more and more into the mainstream… it’s an especially poor choice on PewDiePie’s part in a time when, remarkably, people are having very real discussions on how to deal with a resurgence in real-world Nazism.”

With over 50 million subscribers, PewDiePieisthe new mainstream, and as such has to be careful about what he puts on his channel. Perhaps it’s the nature of the Internet that there’s no room whatsoever for subtlety where satirising hateful content is concerned.