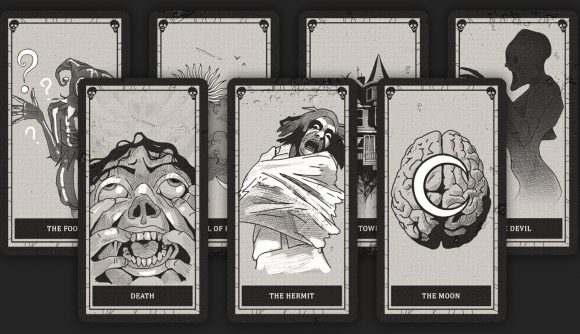 The teases keep on coming for Phasmophobia. The devs at Kinetic Games recently teased a Phasmophobia Christmas update coming to the ghost game – which it seems will be called the Cursed Possessions update – and now a new mechanic is confirmed as on the way, in the form of tarot cards.

Lead artist at the studio Corey J. Dixon has shared a tweet (below) with a bunch of spooky, hand-drawn images made up to look like a deck of seven cards. “We’ve found some mysterious cards,” the dev teases. “There’s a few missing, what could they do?” The answer to that is currently a mystery, but we can get an idea of what the team’s up to through the cards themselves.

Three are clear to see, with images representing ‘death’, ‘the hermit’, and ‘the moon’ – and they’re a little gruesome. The first is the face of figure contorting their skin with their fingertips, the ‘hermit’ depicts a figure desperately trying to escape their bonds, and the latter is of a lovely crescent moon, sure – but it’s also placed slap bang onto the image of a brain.

The four cards tucked away at the back are a little more tricky to discern, though it looks like these include ‘the fool’ (a jester-like figure surrounded by question marks), a building of some kind that seems to include the word ‘town’ or ‘tower’, a shrouded ‘devil’ figure, and one that appears to depict weather, with clouds, a crescent moon’s pointy end, and a stylised sun. Take a look below:

We've found some mysterious cards, there's a few missing, what could they do? #Phasmophobia pic.twitter.com/9vtCBjogQX

We know these will feature in the Christmas Cursed Possessions update based on recent changes to its entry in the game’s public Trello board. What they’ll do, exactly, is still under wraps for now – but fans have been getting their guesses in. YouTuber Psycho suggests, for example, that the mysterious weather-type card could potentially allow you to affect conditions in the game, by heating or cooling rooms and drawing certain ghost types out. This is all unconfirmed for now, though, so we’ll have to wait for more from Kinetic to see what’s really, er, in the cards.

We do know some other new content and changes are coming, however – the first of which tie into ghost identities. “We’ll be updating some of the ghost types that don’t feel unique enough, as well as ones that are really hard to identify on Nightmare difficulty,” the devs explain in the board. Additionally, there are new “cursed possessions” coming in the form of a “tortured” voodoo doll, summoning circle, and music box, as well as some new Ouija board questions. It’s not clear exactly when the update will drop, but it looks like we can likely expect it in the next few weeks.