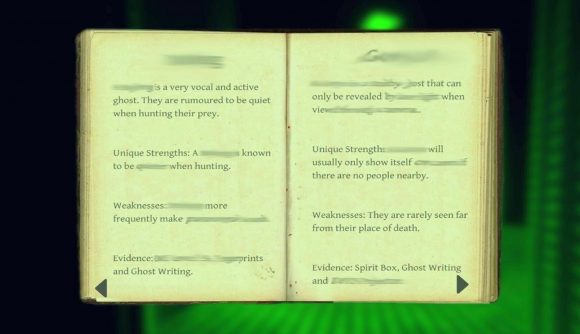 Exciting news, Phasmophobia fans – the ghost game’s big August update is headed our way later today with a whole bunch of new content in tow, including two Phasmophobia ghost types, some equipment to try out, and other bits and pieces.

First up, the when. Kinetic Games has announced on the game’s Discord server and Twitter channel that Phasmophobia’s August update droops tonight (August 26) at 7pm BST – so that’s 2pm ET / 11am PT if you’re based in the US. Now, the what. Following those recent teases, we have indeed got two new ghost types dropping with the patch, and it turns out some fans were absolutely spot on about which ones they’d be. The new ghosts will be the Myling and Goryo – a creepy child spirit from Scandinavian folklore and a vengeful aristocratic ghost from Japanese mythology, respectively.

There aren’t many clues from Kinetic about how these spirits will play just yet, though we’ve got a few hints from the recent notebook image tease (above), which indicates what some of their strengths, weaknesses, and evidence types might be. But we only have a few more hours on the clock before we get to find out for ourselves.

Elsewhere in the update is a new DOTS projector that lets you “find distorted silhouettes”, and there’ll be “new and improved equipment” to try out, too. If you’re keen to get an idea of these ahead of time, check out the most recent tweets on Phasmophobia’s Twitter channel, as the devs have been posting some high-detail screens of the shiny new kit.

Hunt down the newly discovered Myling and Goryo, find distorted silhouettes with the new DOTS projector, and adapt to your new and improved equipment.#Phasmophobia pic.twitter.com/qJVm7BktzS

From the game’s public Trello board, we also know there should be some adjustments to sprinting and visual tweaks coming with the update, so keep an eye out for those, too.

Check out our rundown of the best horror games on our home platform if you’re after some other tips on what’s good to play in the genre.